Over 4,000 persons in Luzon affected by floods–NDRRMC 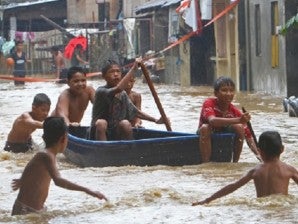 MANILA, Philippines – Over 4,000 people were affected by floods brought about by the low pressure Aarea (LPA) that drenched a large area of Luzon on Tuesday.

In the municipality of Bombon, Bicol alone, 800 families or 4000 persons were affected when the creek that feeds into the Bicol River overflowed causing approximately two feet- or knee-high waters, the National Disaster Risk Reduction and Management Council (NDRRMC) said in its report Wednesday.

The villages of San Roque, San Jose, San Isidro, Sto. Domingo, Pagao, and San Antonio were affected by the flooding, it said.

In Alabat, Quezon, 12 families or 50 persons were evacuated to the Barangay Hall of Poblacion 1 due to flashfloods, NDRRMC said.

Barangay Mayamot and Bagong Nayon in Antipolo had to evacuate three families or 15 persons due to landslides.

Two villages in Obando, Bulacan, Barangay Lawa and Pagasa, experienced two feet- or knee-high floods while 1.5 feet-high waters hit Barangay Panghulo and Catanghalan, it said. The number of people affected was not reported by the NDRRMC.

Obando Mayor Orencio Gabriel told Radyo Inquirer 990AM that the flooding was aggravated by the high tide.

He added that garbage from Metro Manila and nearby towns in Bulacan remained a problem for Obando, and that a dike was badly needed to prevent flooding.

One foot deep floods affected the residents of Barangay Betis and Poblacion in Guagua, Pampanga.

At least two people were also killed Tuesday when a wall, weakened by the non-stop rain, collapsed and crushed three shanties on Gen. T. De Leon Road near the boundary of Barangay (village) Ugong in Pasig City.