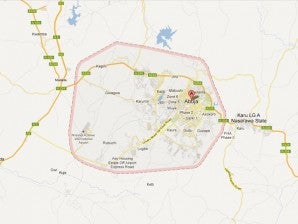 ABUJA — An explosion went off on Tuesday at a shopping center in the Nigerian capital Abuja, where an unexploded bomb was later discovered, rescue officials said.

The first blast happened at roughly 9:00 p.m. at a shopping plaza in the city’s Wusa II district, spokeman for the National Emergency Management Agency (NEMA), Yushau A. Shuaib, said in a statement.

Rescue workers then rushed to the scene and cordoned off the area, where the unexploded bomb was discovered, an official said.

“When we were trying to find out what is happening, the anti-bomb squad discovered another one. They just detonated it,” the head of NEMA’s Abuja office, Ishaya Chonoko, told journalists at the scene.

“The good thing is that there was no report of human casualty,” he added.

An Agence France-Presse reporter said the scene was swarming with rescue workers from several emergency services, but that journalists were being kept several hundred meters (yards) back and so it was not possible to survey any potential damage.

The shopping centre is located in a commercial district of Abuja and is not particularly close to any major government buildings.

Nigeria’s Boko Haram Islamists, responsible for scores of attacks in recent months, have previously struck targets in and around the capital.

A suicide bomb attack on UN headquarters in Abuja in August killed at least 25 people, while another at the Abuja office of one of the country’s most prominent newspapers left four dead.

Most recently, on June 22, a blast went off outside a nightclub in Abuja that shattered the windows of nearby buildings but caused no casualties.