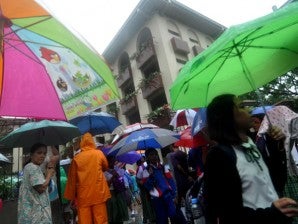 Students wait for their parents outside the Palanan Elementary School in Manila as classes were suspended due to continuos rain on Tuesday. PHOTO BY RICHARD A. REYES

Heavy rains and flooding disrupted classes in many parts of Luzon on Tuesday and sent officials preparing for evacuations.

In two Bulacan towns—Obando and Hagonoy—classes were suspended when heavy rains and high tide in Manila Bay combined to bring floods to low-lying areas.

In Rosario, Cavite, a school was submerged in knee-deep floods but mainly because of high tide, according to Mayor Jose Ricafrente.

Ricafrente said water started to rise at dawn Tuesday, prompting the suspension of all classes in the town.

Cavite Gov. Juanito Victor Remulla ordered classes suspended in the towns of Noveleta and Naic, which are along the coast of Manila Bay.

Classes were also suspended in Bacoor and Tagaytay Cities, Cainta in Rizal and Calamba City in Laguna.

Agustin said a gate was opened and started releasing water at 48.5 cubic meters per second when the dam level reached 101.05 masl early yesterday.

Agustin said the water release was minimal and would not significantly increase water levels in the province’s waterways.

The water level at Angat Dam, located upstream of Ipo Dam in Norzagaray town, was recorded at 186.05 masl on Tuesday morning, still below its 212 masl spilling level, according to the disaster response council.

At the eastern coastal side of Masantol, houses and schools were flooded due to high tide.

In the Cordillera, police said they would distribute the “blue box,” a kit containing rescue and medical equipment, to policemen in the region for rescue operations.