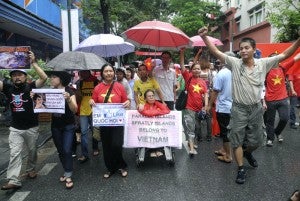 About 200 protesters march through the capital’s streets on Sunday, July 1, 2012, in Hanoi Vietnam, following China's recent announcement that it will open nine oil and gas lots to international bidders, even though the area overlaps with Vietnam’s current foreign exploration contracts. Amid this deepening row with Vietnam over competing territorial claims, China has deployed four patrol ships to the disputed area of the South China Sea, China’s state media said Sunday, July 01, 2012. AP PHOTO/MARGIE MASON

BEIJING—China has deployed four patrol ships to a disputed area of the South China Sea, state media said Sunday, amid a deepening row with Vietnam over competing territorial claims.

The ships, described by the Xinhua news agency as surveillance vessels, reached what China calls the Huayang reef in the Spratly islands on Sunday.

China last month summoned Vietnam’s ambassador in Beijing and protested a law adopted by the Vietnamese parliament that places the disputed Spratly islands under Hanoi’s sovereignty.

China and Vietnam, as well as other neighboring nations, are locked in longstanding territorial disputes over the South China Sea, including the resources-rich Spratly and Paracel islands.

Xinhua said that the ships left China’s southern island province of Hainan on June 26 and would travel more than 2,400 nautical miles on patrols.

The ships are under the authority of the Chinese government’s State Oceanic Administration and not the country’s navy.

China said Thursday it would resolutely oppose any military provocation in its territorial waters and protect its sovereignty – remarks that appeared to be directed partly at Vietnam.

“The determination and will of China’s military to safeguard national sovereignty and territorial integrity is unwavering,” he said.

China said last month it had elevated the administrative status of what it calls the Nansha (Spratly) and Xisha (Paracel) islands from a county to a prefectural-level district.

Tensions in the South China Sea have risen sharply recently, with China and the Philippines also locked in a maritime dispute over Scarborough Shoal, a reef off the Philippine coast.

Taiwan, Vietnam, Brunei, China, Malaysia, and the Philippines all claim parts of the South China Sea.