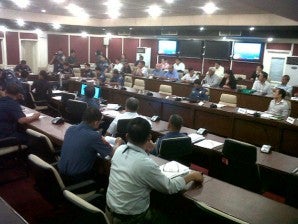 Philippine National Police, through its Bids and Awards Committee conducted a public bidding Thursday at the National Headquarters for its procurement of 59,904 units of 9mm pistols to fill in 100 percent of PNP handgun requirement. Jamie Marie Elona

The joint venture between a local company and an Israeli arms manufacturer won the bid to supply just under 60,000 pistols to the Philippine National Police, for which the PNP was prepared to pay almost P1.2 billion.

Filipino firm R. Espinelli and the Israel Weapons Industry submitted the lowest bid of P974 million, which would save the government P226 million.

But the bid was questioned by a representative of a losing bidder, Kolonwel Trading, which is in a joint venture with a Czech firm, who pointed out problems in the documents Espinelli submitted, including a translation of foreign documents that was not certified by Israel’s embassy in the Philippines.

The bidding rules state that all translations of foreign language documents must be certified by the embassy concerned in the Philippines.

After a long deliberation, the PNP’s bids and awards committee (BAC) decided to allow the opening of Espinelli’s bid and directed Kolonwel to put its objections in writing.

The second lowest bid was submitted by Trust Trade, in a joint venture with Glock Asia Pacific, at P998 million.

Kolonwel submitted the third lowest bid at P1.06 billion, while Arms Corp. of the Philippines came in fourth with P1.197 billion.

The public bidding for the firearms deal started at 2 p.m. Thursday in the main conference room of the PNP headquarters at Camp Crame in Quezon City.

Two other companies that submitted bids were disqualified for not complying with a requirement to submit sample firearms to the BAC a day before the public bidding.

The gun procurement, one of the biggest by the PNP in recent years, is seen to fill 100 percent of the PNP’s short firearms requirement. Interior Secretary Jesse Robredo had pointed out that only 63 percent of all policemen had a short firearm as of 2011.