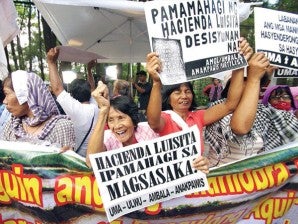 A militant farmers’ group on Thursday demanded that the Department of Agrarian Reform (DAR) release the original list of farmer-beneficiaries of the Cojuangco-owned Hacienda Luisita in Tarlac.

The Kilusang Magbubukid ng Pilipinas (KMP) and 200 farmers who held a vigil at the Mendiola Bridge near Malacañang on Thursday said they feared that a verification process being carried out by the DAR was an attempt by the Cojuangco owners to evade the distribution of their 4,300-hectare sugarcane estate under the Comprehensive Agrarian Reform Program (CARP).

President Benigno Aquino is a member of the Cojuangco clan.

KMP deputy secretary-general Willy Marbella said the verification process to determine the 6,300 farmer-beneficiaries and their heirs aims to sow disunity and confusion among Hacienda Luisita farmers.

“Under the guise of so-called ‘verification process,’ the DAR, with the blessings of no less than President Aquino, is maneuvering to evade land distribution,” he said.

“The DAR’s highly questionable verification process is all in accordance with the Cojuangcos’ move to bloat the number of beneficiaries, further reduce the size of land for distribution, sow confusion and disunity among farmworkers, and eventually put their dummies and loyalists as so-called beneficiaries,” Marbella said.

The group demanded that the DAR produce the 1989 list of beneficiaries that had served as the Hacienda Luisita management’s basis for distributing stock certificates under the stock distribution option (SDO) scheme.

According to reports, the DAR has already interviewed 8,400 farmworkers ostensibly to validate those who signed the November 1989 SDO. In Cutcut and Balete villages, the DAR has interviewed more than 6,000 potential beneficiaries.

The names of Hacienda Luisita farmers who were interviewed will be checked against the 1989 list of farmer-beneficiaries, which became the basis for the implementation of the SDO in the estate.

Under the 1989 scheme, the 6,200 beneficiaries agreed to accept company stocks instead of land.

Early this year, the Supreme Court ruled that the SDO was unconstitutional and against the spirit of CARP as it did not give control of the land to the farmers.

The high court’s decision gave the DAR the go-signal to distribute a 4,300-hectare chunk of the sugar estate to the farmers who have worked on it for generations.