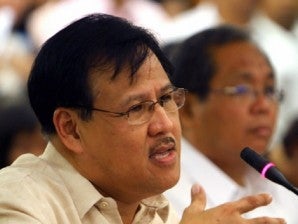 Interior Secretary Jesse Robredo said that as of 2011, only 63 percent of PNP officers had been provided with short firearms. INQUIRER FILE PHOTO

The Philippine National Police (PNP) will start accepting bids on Thursday for the purchase of almost 60,000 pistols worth an estimated P1.2 billion in a bid to arm all of its police officers.

The public bidding begins at 2 p.m. of June 28 in the main conference room of the PNP’s Camp Crame headquarters, the PNP bids and awards committee (BAC) announced Tuesday.

Interior Secretary Jesse Robredo earlier said that as of 2011, only 63 percent of PNP officers had been provided with short firearms.

This will be one of the PNP’s biggest procurements since the establishment of the Capability Enhancement Program, aimed at modernizing the PNP and upgrading equipment, said Deputy Director General Emelito Sarmiento, the PNP deputy chief for operations.

In the prebidding conference on June 7, at least seven companies expressed interest to join the bidding for the 59,904 units of 9 millimeter handguns, Cerbo said. The price is estimated at P1.198 billion.

Bidding will be conducted through open competitive bidding procedures using “pass/fail” criteria as specified in the Revised Implementing Rules and Regulations of Republic Act No. 9184, or the Government Procurement Act, he said.

The company that comes in as the lowest calculated bidder (LCB) will have to undergo post-qualification procedures, including a 20,000-round “endurance test” for the weapon to ensure its reliability and durability.