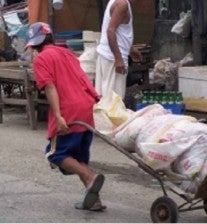 There are 5.59 million child laborers toiling in the Philippines and almost all of them are working in hazardous conditions, according to a survey financed by the International Labor Organization (ILO).

The 2011 Survey on Children conducted by the National Statistics Office (NSO) and released Tuesday showed that out of the 29.019 million Filipino children aged 5-17 years old, about 18.9 percent or 5.59 million, were already working.

This is higher than the 4 million Filipino working children registered in a 2001 survey conducted by the ILO and the US Department of Labor.

“We’re surprised by this … We at the (labor department) reiterate our pledge to do our utmost in making every barangay in the country with high child labor incidence child labor-free,” Labor Secretary Rosalinda Baldoz said at the launching in Pasig City of a new campaign to stamp out child labor in the country.

“In carrying out this resolve, we will take it one barangay at a time. We will meet the challenge head-on,” she added.

Baldoz said the government had identified 609 of the country’s poorest municipalities and was targeting 80 barangays (villages) that had the highest incidence of child labor.

She also pointed out that the survey showed that 69.5 percent of child laborers, or 2.106 million, were attending school.

Under the law, child labor is defined as any work or economic activity performed by a child that subjects him or her to any form of exploitation, or is harmful to his or her health and safety, or physical, mental, or psycho-social development.

Hazardous child labor refers to employment in industries and occupations designated as hazardous under the country’s occupational safety and health standards.

“We have to get to the root of child labor which is linked with poverty and lack of decent and productive work,” said ILO country director Lawrence Jeff Johnson.

“While we strive to keep children in school and away from child labor, we need to ensure decent and productive work for parents and basic social protection for families,” Johnson added.

Carmelita Ericta, NSO administrator, said 60 percent of child laborers in the country were in the agricultural sector.

“There are two boys for every girl, especially in agriculture. In the services sector, there are more girls than boys. Sixty percent are in agriculture unlike in our Labor Force Survey which shows that only 30 percent (of the country’s labor force) is in agriculture,” Ericta said.

“As they grow older, they also tend to drop out of school. With the younger age group, aged 5 to 9 years old, 90 percent are in school. By the time they reach 15, only half of them are in school,” she said.

“They are working mostly in the farms but some of them work in construction sites. Around 3 percent are actually in the mines, quarries, or factory sites,” she added.

The regions which had the highest incidence of child labor were Central Luzon, Bicol, Western Visayas, Northern Mindanao, and Central Visayas, the survey showed.

Ericta said the 2.993 million child laborers exposed to hazardous conditions could include those involved in the worst forms of child labor—the sex trade, drug trafficking, other illicit activities and armed conflict.

“They could be included but they’re not labeled as such. This is because when you ask them where they work, they could say they’re waitresses when they’re actually prostituted children,” Ericta said.

“These (2.993 million) are the ones exposed to chemicals, biological hazards like bacteria that cause diseases or physical hazards,” she added.

The Philippines has pledged to reduce by 75 percent all worst forms of child labor by 2015, which is anchored on the United Nations’ millennium development goal of achieving universal education.

Ericta also said that the 2001 and 2011 surveys could not be compared because a different methodology was used in the 2001 survey which involved “more general questions.”

Ericta said the survey was conducted in October 2011 involving 50,000 families across the country.