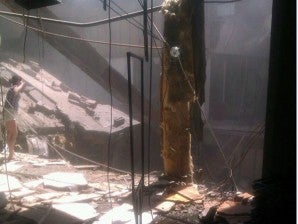 A woman checks out the damage after a roof collapsed at the Algo Centre Mall in Elliot Lake, Ontario, Saturday, June 23, 2012. The partial collapse prompted a local state of emergency and a search for anyone who might have been injured in the cave-in. AP/The Canadian Press, Cora Richer

MONTREAL – The partial collapse of a ceiling at a shopping center in northern Ontario trapped two people under rubble, and one may have died, police from the Canadian province announced Sunday.

“We have obtained some visual information relating to a visual of a hand and a foot which is our ground for the suspected casualty in this case,” investigator for the Ontario Provincial Police (OPP) Percy Jollymore told the press.

“We cannot confirm the identity, we cannot confirm anything about that,” he added, adding that the collapsed structure was still too unstable for the rescue team to reach the critical zone.

Since the partial collapse of a parking structure roof at Algo Centre Mall in Elliot Lake on Saturday, 22 victims have been treated for injuries, mostly superficial.

“Some of our search members this morning heard a couple of taps. They called for a quick silence on the site and there was a couple more taps. That was an indication to us that we were dealing with a rescue,” said one emergency management spokesperson.

The police have no news of at least nine people on a list they have drawn up of persons who may have been at the mall during the collapse.

A team of specialists with sniffer dogs was at the scene, and will continue the search into the night.

The premier of Canada’s most populous province, Dalton McGuinty, offered his thoughts and prayers to the entire Ontario population, but especially the victims and their families.

Built in the 1980s, the shopping complex housed a grocery shop, restaurants and other stores. Water leakages were reported in recent months.