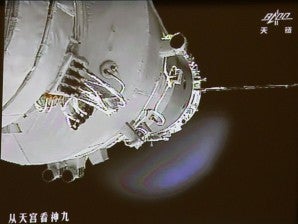 Beijing – A Chinese spacecraft on Sunday successfully completed the country’s first manual docking in orbit, the official Xinhua news agency said, a milestone in an ambitious program to build a space station.

The Shenzhou-9 spacecraft manually linked with the Tiangong-1 module just over a week into a manned space mission which includes China’s first female astronaut, following an automatic docking on Monday.

“The first manual docking has been completed normally,” mission control announced in a live

The manual “space kiss” was the main goal of the Shenzhou-9 mission, testing the docking technique essential to building a space station – which China aims to do by 2020.

The two spacecraft first came together in an automatic docking on June 18, and several hours later the three astronauts on board Shenzhou-9 entered the experimental Tiangong-1 module – a first for China.

Earlier on Sunday, the two vessels separated in preparation for the manual docking, which state media originally said would take place around noon (0400GMT), although it was not completed until roughly 45 minutes later.

Manual docking is hard to master as it involves two vessels – placed in the same orbit and revolving around Earth at thousands of kilometres (miles) per hour – coming together very gently to avoid destroying each other.

The Tiangong-1 will only stay in orbit until 2013 and will later be replaced.