UP monorail project still on track–DoST 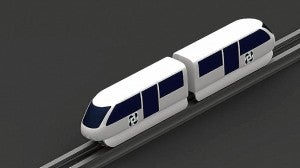 An artist’s concept of the monorail being planned for the country’s premier state university. DOST PHOTO

MANILA, Philippines—If all goes as planned, students of the University of the Philippines in Diliman, Quezon City, will soon have access to another mode of transport within the campus aside from the ubiquitous Ikot jeepneys.

The Department of Science and Technology (DoST) has announced that it will be pushing through with its plan to build a monorail on the university campus—an alternative transport system it hopes to implement in Metro Manila.

With the help of private contractor Miescor Builders Inc., construction of the locally designed monorail on a 465-meter-long elevated test track will soon start with the train expected to start operating by October or around the start of the second semester.

Called the Automated Guideway Transit System, or AGTS, the monorail will run on technology designed wholly by Filipino engineers and scientists at UP and DoST’s Metals Industry Research and Development Center (MIRDC), according to Science and Technology Secretary Mario Montejo.

“[It] will be the future of mass transport systems,” he said of the technology already in use in Japan, Singapore, United States and Canada.

With an elevation of 6.1 meters, the AGTS track will run from C. P. Garcia Avenue up to the UP College of Fine Arts.

The train is designed to be a “fully automated, driverless” electric transporter with two adjoining coaches that can hold 60 passengers. The coaches will run on rubber tires instead of metal wheels “to minimize track noise,” the DoST said.

The UP test track will help DoST engineers fine-tune the design of its train technology, including its speed, stability, brake distance and power, said Jonathan Puerto, an engineer who is also MIRDC’s officer-in-charge.

Read Next
‘A Night of Music’ with UP Singing Ambassadors slated on June 23
EDITORS' PICK
Smart, TNT launch more powerful and value-packed Double GIGA+ 50 offer
Pagasa: No tropical cyclone expected in the next few days
House energy committee chair Arroyo bats for cheap electricity
NDRRMC confers posthumous award on 5 fallen Bulacan rescuers
Having confidential funds not a DepEd norm – Pimentel
Motorcycles, smartphones, and cash prizes up for grabs in TNT’s ‘Tuloy Ang Saya’ Raffle in Mindanao
MOST READ
Sharon Cuneta ‘turned away’ at Hermes boutique in Seoul, welcomed by LV
Having confidential funds not a DepEd norm – Pimentel
Marcos in Singapore for F1 Grand Prix – source
WATCH: Coleen Garcia dances with Billy Crawford in France’s ‘Dancing with the Stars’
Don't miss out on the latest news and information.

TAGS: monorail, rail transport, University of the Philippines (UP)