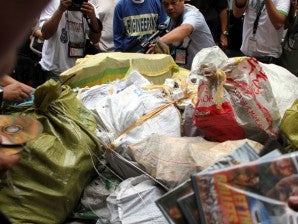 The Anti-Fraud and Commercial Crime Division chief, Superintendent Benjamin Accorda, said the two were arrested after authorities raided DVD-R Master Inc. located at 1204 Soler Street in Binondo by virtue of several warrants for violation of section 155 and 168, in relation to section 170 of Republic Act 8293.

CIDG said DVD-R Master Inc. violated the intellectual property right of the Blue Ray DVD R King Inc. when it illegally copied the trade mark of the Sumax and Mr. Data and distributed the counterfeit products in the local market.