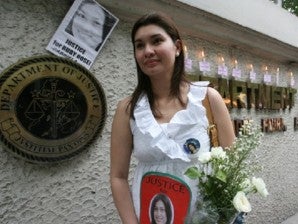 MANILA, Philippines – Family, friends and supporters of slain Ruby Rose Barrameda trooped to the Supreme Court on Monday in their continuing quest for justice, roughly three years since her body was found stuffed inside a steel drum sealed with concrete in the waters off Navotas City.

A Radyo Inquirer 990AM report said that running priest Father Robert Reyes led the group in a prayer rally in front of the Court of Appeals.

The report quoted the victim’s sister, Rochelle Barrameda-Labarda, as saying they have yet to achieve justice for Barrameda, who disappeared in 2007 amid a custody battle with her husband Manuel Jimenez III over their two children.