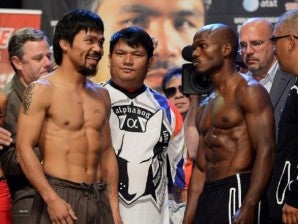 And like previous public screening announcements of the Saranggani lawmaker’s earlier bouts, these streamers come with the names of politicians who financed these “public services.”

Political families and businessmen have always profited each time the so-called Pacman fever rose. Local cinemas, sports clubs and dining areas have been selling pay-per-view tickets here and in various parts of Luzon.

The Nueva Ecija government has sponsored free public screenings of the in three venues in Cabanatuan City starting at 9 a.m. Sunday.

Jayson Marcos, officer-in-charge of the provincial capitol’s youth development services office, said the live screenings were “part of our efforts to promote sports and fitness and as a public service to Novo Ecijano boxing fans and enthusiasts.”

People are expected to troop to the Nueva Ecija University of Science and Technology gym, the Padre Crisostomo Elementary School gym in Barangay Aduas, and Barangay DS Garcia gym here on Sunday morning.

In Dagupan City, the CSI Mall has also been selling tickets for the match.  A local resident said the show may include short commercial clips of Pangasinan politicians expressing support for Pacquiao, which were featured in previous fights screened by the mall.

In Baguio City, the developer and administrator of Camp John Hay  ended up tussling over the Pacquiao-Bradley match. Alfredo Yñiguez, executive vice president of the Camp John Hay Development Corp. (CJHDevco), said he was enraged by a directive from a government agency that stopped it from screening the match at a John Hay hotel.

In a statement released this week, the John Hay Management Corp. (JHMC) informed CJHDevco that it would have to “change the venue of the pay-per-view Pacquiao-Bradley match scheduled on June 10 at the 19th Tee of the Camp John Hay Suites.”

The Suites, operated by the CJHDevco, has not been given an occupancy permit by JHMC due to alleged violations of the building code and fire safety regulations, a JHMC statement said.

JHMC, estate manager of the former American rest and recreation baseland, is a subsidiary of the Bases Group of Companies owned by the Bases Conversion and Development Authority, which is in the middle of a contractual dispute with CJHDevco.

Yñiguez said: “We have no plans to change the venue [for screening the Pacquiao-Bradley match]. We have an existing and valid occupancy permit granted by City Hall.”