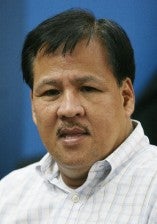 He said Aurora was the lone province that received a P7 million cash incentive; the three cities, Malolos and Meycauayan in Bulacan, and San Jose in Nueva Ecija, each received P3 million, while the 41 towns received P1 million each.

Robredo formally handed over the PCF checks to the recipient local government units  of Region III during the recent Tapatan Roadshow on Disaster Preparedness and Climate Change Adaptation at Clarkfield in Angeles City.

“We hope that through the PCF, LGUs will be able to further enhance their performance in local administration and improve their services to their constituents,” he said in a statement.

The PCF is a financial incentive awarded to qualified LGUs to start local development initiatives that are aligned with the national government’s programs for the attainment of the United Nations Millennium Development Goals, tourism and local economic development, disaster risk reduction and management and solid waste management.

For an LGU to qualify for the PCF, it should secure the “Seal of Good Housekeeping,” a government measure evaluating provinces, cities and towns based on key governance areas, including fiscal management, transparency and accountability and valuing performance management, Robredo said.

He called on local officials to strive for the seal of good housekeeping as “a tenet of good governance,” and urged them to use the PCF to finance development projects such as school buildings, water and sanitation systems, local roads and bridges, flood control, and reforestation.

Robredo told the more than 500 participants in the Region III’s roadshow that the government had allocated P750 million for the year’s Performance Challenge Fund.