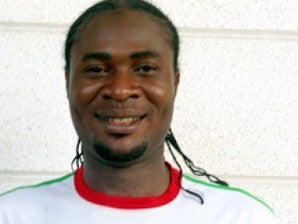 Charles Ujam, 30, who plays as a defender for the Pasargad Football Club under the United Football League, was subdued by security guards at the Studio 54 Bar at the corner of MH Del Pilar and Salas Streets in Malate and turned over to the police.

PO3 Gilbert Isole of the Manila Police District General Assignment Section said that the arrest stemmed from a complaint by Haydie Lucas, 26, of Las Piñas City, who claimed that Ujam hurt her and made unsavory remarks to her.

Isole said that Ujam and several other team mates were having drinks and were playing pool at the bar at around 4 a.m. when one of the Nigerians ordered an energy drink for a companion identified only as Baylon.

When Lucas gave Baylon the energy drink, Ujam allegedly grabbed the belt bag around the waitress’ waist and asked her why she delivered an energy drink when Baylon never ordered any. Lucas claimed that she tried to explain that one of their companions had ordered the drink for Baylon but Ujam would not listen and instead grabbed her by the arm while asking her if she would have sex with Baylon.

Lucas said that when she said “no,” Ujam shouted at her: “Don’t say no to me. How much is your service?” still holding her by the arm. When the waitress asked him to let go, he refused and instead pinched her nose hard.

Ujam was about to slap her when he was accosted by bar security personnel, who promptly turned him over to the custody of the MPD.

Isole pointed out that Ujam was apparently drunk at the time, testing positive for alcohol when he was brought to the Ospital ng Maynila for mandatory physical examination before booking.

Ujam remains detained at the MPD holding cell pending the filing of a charge of slight physical injury against him at the city prosecutor’s office.

Read Next
Myanmar calls for complete lifting of sanctions
EDITORS' PICK
PNP: To avoid crypto scam, visit BSP website
LPG prices up by P2.25-P2.27/kg effective Dec 1
Pagasa: 1 to 2 storms expected in December
The vivo Y16 makes the season of giving more thoughtful for the whole family
House energy committee chair Arroyo bats for cheap electricity
The Best Tech Gifts For The 2022 Holidays
MOST READ
Don't miss out on the latest news and information.