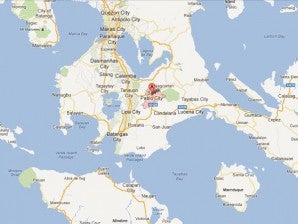 MANILA, Philippines – A board member in San Pablo, Laguna was wounded while his driver was killed in an ambush Wednesday evening, police said on Thursday.

Superintendent Romeo de Castro, chief of police, said board member Reynaldo dela Torre Paras, 55, was wounded, and his bodyguard-driver, Geovanni Legaspi Dumaraos was declared dead on arrival at the hospital after they were attacked along A. Bonifacio Street in Barangay VII-C in San Pablo City, Laguna at around 8:20 p.m.

But de Castro said one of two gunmen identified as Eugene Rocaldo Bacoto, 25, was also wounded after Paras managed to return fire at the suspects.

De Castro said that Paras, 55, came from Sta Cruz town and had stopped by a bakery on his way home in San Pablo City when they were attacked.

“(Paras) was standing in front of a bakery when he was attacked. I knew he used to buy bread from that bakeshop to take home to his wife,” De Castro said.

The two gunmen, he said, appeared to have been waiting for Paras as they had positioned themselves about five meters from the official when they opened

“We just couldn’t say yet if it was Paras or the bodyguard who shot Bacoto,” said De Castro, as the police were still waiting for results of ballistic tests.

Bacoto was arrested when police arrived at the scene, but the other gunman escaped.

Shortly after the attack,  the escaped gunman stole  a motorcycle nearby and used it to get away, abandoning the vehicle near the noundary between San Pablo City and the town of Alaminos, Laguna police director Senior Supt. Gilbert Cruz said.

The man could have also been wounded as police found blood on the motorcycle, Cruz added.

Cruz said Paras had dropped by the provincial police headquarters in Sta Cruz Wednesday afternoon to report he had been getting threats.

“He said he had been receiving threats on his life,” Cruz said, declining to give more details as an   investigation was ongoing.

Bacoto, who remained in the hospital under heavy police guard, refused to name the mastermind of the  attack, according to De Castro.

Paras, who represents the third district of Laguna on the Provincial Board, heads the committee on peace and order. He was police officer before he entered politics.