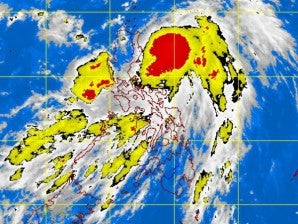 MANILA, Philippines—Tropical Storm “Ambo” (international codename: Mawar) gained more strength and severity over the Philippine Sea Saturday as it roared off the coast of the northern tip of the archipelago, intensifying monsoon rains over the area.

By Saturday afternoon, the weather bureau raised Signal No. 2 over the Batanes  and Calayan group of islands, and maintained Signal No. 1 over Northern Aurora, Isabela and Cagayan, including the Babuyan Islands.

While it did not threaten any part of the country with a direct hit, the storm intensified monsoon rains in  Central and Southern Luzon and the Visayas, the Philippine Atmospheric, Geophysical and Astronomical Services Administration said.

It was generating 15 millimeters to 25 millimeters of rainfall per hour, considered heavy, within its area of circulation, which had a diameter of 400 kilometers, Its center or eye was not expected to hit any Philippine land mass, Pagasa said.

The bureau forecast moderate to heavy rainfall in Central and Southern Luzon  and the Visayas, and “occasional to frequent rains” over Metro Manila.

“This could become moderate to heavy in the next few days because it’s the southwest monsoon that is bringing the rain,” Perez said.

By 4 p.m. Saturday, Ambo had turned more severe, packing maximum sustained winds of 95 kilometers per hour near the center with gusts of up to 120 kph.

The storm was moving north-northwest off the coast of northern Luzon, some 210 kilometers northeast of Casiguran, Aurora at a higher speed of 15 kph.

It was forecast to be 150 km east of Basco, Batanes, Sunday afternoon, and to change direction later and move north northeast away from the archipelago toward Okinawa, Japan. But it could intensify into a typhoon over sea.

It is expected to exit the Philippine area of responsibility on Tuesday.