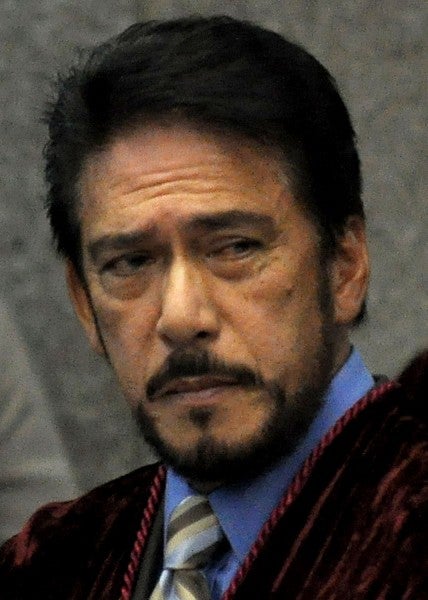 After reading the judgment of 20 senators finding Corona guilty of Article 2, Enrile surprisingly failed to mention the penalty on Corona, which is removal from public office and disqualification from public office.

“There was no need to mention the penalty. It’s explicit in the Constitution. We need not elaborate it,” Sotto said by phone Tuesday night.

After the verdict was handed down at 6 p.m. Tuesday, the penalty was “immediately effective” and that the notice to be delivered by Senate Secretary Emma Reyes to the Supreme Court, possibly Wednesday morning was only a formality, Sotto said.

Section 7, Article 11 of the 1987 Constitution states that judgment in impeachment cases “shall not extend further than removal from office and disqualification to hold any office,” but the party convicted “shall nevertheless be liable and subject to prosecution, trial and punishment, according to law.”

Senator Ferdinand Marcos Jr., one of the three senators who voted to acquit Corona, agreed with Sotto, and said there was no need for Enrile to state the penalty.

“It’s clear to all of us that the penalty is removal from public office,” he told reporters.

After reading the verdict, Enrile ordered the Senate Secretary, as clerk of impeachment court, to furnish Corona, his counsel, the Supreme Court en banc, President Benigno Aquino III, Speaker Feliciano Belmonte Jr. and the Judicial and Bar Council a certified copy of the judgment.

“The President has 90 days, if I’m not mistaken, to appoint the next Chief Justice,” deputy presidential spokesperson Abigail Valte told reporters less than an hour after the Senate impeachment trial of Corona ended with his conviction.

Valte said the short list of nominees for the top Supreme Court post would come from the Judicial and Bar Council.

Mr. Aquino is expected to give a statement on the verdict Wednesday in Malacañang, according to Valte.  With a report from Christine O. Avendaño