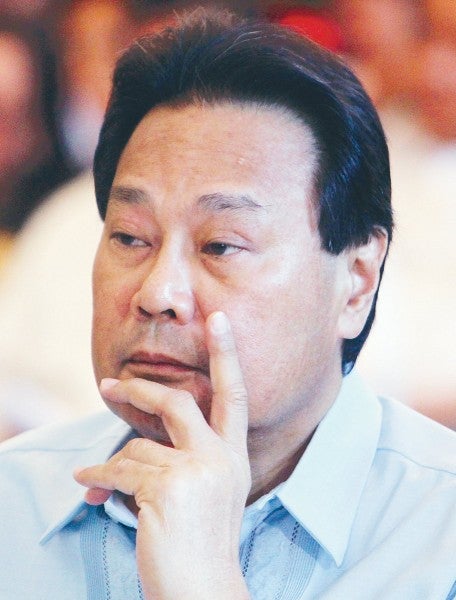 But beyond that vote of 20 of the 23-member Senate ousting Chief Justice Renato Corona for dishonesty in submitting his statements of assets, liabilities and net worth (SALNs), Minority Leader Alan Peter Cayetano pointed to a “new paradigm” in good governance.

He said that he admired Corona’s submission of an unconditional waiver during his second appearance before the Senate impeachment court on Friday allowing the government to scrutinize all his assets, not just the bank accounts.

Saying the Corona waiver “has set a new standard” among public officials, Cayetano said that President Benigno Aquino III should now instruct his Cabinet to do the same “or resign and leave government.”

“Lead by following, or get out of the way,” he said, noting that the same standard should be applied from the executive branch down to the barangay (village) level. “We should all follow this standard. The standard for one should be the standard for all.”

The 20-3 vote ousting the 63-year-old Corona came after 43 riveting days of the nationally televised impeachment trial for culpable violation of the Constitution and betrayal of public trust.

In a statement issued from his hospital bed, Corona said he was accepting his “calvary” and left unanswered the question of whether he would still go to the Supreme Court to seek relief, possibly a declaration of mistrial. His lawyers said they were still to meet with Corona later in the evening.

The senators took Corona to task for his failure to include some $2.4 million in bank deposits—on top of an allegedly commingled amount worth P80.7 million—in his SALNs from 2002 to 2010.

“The Senate, sitting as an impeachment court, having tried Renato C. Corona,  Chief Justice of the Supreme Court, upon three articles of impeachment charged against him by the House of Representatives, with a guilty vote by 20 senators representing at least two-thirds of all the members of the Senate, has found him guilty of the charge under Article 2 of the said articles of impeachment,” Senate President Juan Ponce Enrile announced after four hours of voting.

“Now, therefore, be it adjudged that Renato C. Corona is hereby convicted of the charge against him in Article 2. So ordered,” he continued, before banging the gavel to signal the end of the impeachment trial.

The announcement was greeted by subdued clapping from the gallery, despite restrictions imposed by the Senate sergeant at arms.

Copies of the verdict were ordered transmitted to President Aquino, who campaigned for Corona’s removal, the Supreme Court en banc, Corona’s camp, the House of Representatives, and the Judicial and Bar Council, which would provide the President with a short list of candidates as the next Chief Justice.

The conviction puts an abrupt end to Corona’s stint as the country’s highest magistrate, which began in May 2010 with his disputed appointment by the outgoing President, Gloria Macapagal-Arroyo.

Only Senators Joker Arroyo, Miriam Defensor-Santiago and Ferdinand Marcos Jr. voted to acquit Corona. They all agreed that Corona’s failure to disclose assets in his SALNs was not an impeachable offense.

As presiding officer, Enrile cast the final vote with Corona’s fate already sealed. He provided an overview of the entire trial, its curious twists and turns and legal and “moral dilemmas.”

“I have constantly held that those who face the judgment of imperfect and fallible mortals like us have recourse to the judgment of history, and, ultimately, of God,” he said.

“And so, with full trust that the Almighty will see us through the aftermath of this chapter in our nation’s history, I vote to hold the Chief Justice, Renato C. Corona, guilty as charged under Article 2, Paragraph 2.3, and that his deliberate act of excluding substantial assets from his sworn statement of assets, liabilities and net worth constitutes a culpable violation of the Constitution.”

Majority of the senators did not buy Corona’s position that he was precluded from declaring his dollar deposits—purportedly his family savings of nearly four decades—in his SALNs because of the “absolute” confidentiality provision of the Foreign Currency Deposit Act (Republic Act No. 6426).

Enrile, in particular, rejected Corona’s reason that he did not declare some P80.7 million worth of deposits in three peso accounts because they were “commingled” with his family’s savings, including money from Basa Guidote Enterprises Inc. (BGEI).

“Assuming that any part of such deposits in truth belonged to third parties, the respondent could have indicated such third-party funds as corresponding liabilities in his SALN. That would have reflected his real net worth,” the Senate President said.

Enrile described as “grossly misplaced” the Chief Justice’s “reliance on the absolute confidentiality” provided under RA 6426. He cited the constitutional requirement for all government employees to submit SALNs.

“Are we now to say that this constitutional command is limited to a public official’s assets or deposits in local currency? If so, would we not be saying, in effect, that the Constitution allows something less than a full, honest and complete disclosure?” he asked.

Enrile said Corona could have converted his dollar deposits into peso and reflected them in his SALNs. “The nondisclosure of these deposits, in both local and foreign currency, would naturally result in a corresponding distortion of the Chief Justice’s real net worth,” he said.

Because Corona was already found guilty of the second article of impeachment, the court no longer voted on the two other charges—Article 3 on the alleged flip-flopping SC decisions, and Article 7 on the Supreme Court’s temporary restraining order against a justice department order preventing Arroyo from seeking medical treatment abroad.

A recurring issue throughout the trial was the matter of “hypocrisy.”

Enrile acknowledged the question as to why Corona should be punished for an error—the failure to make full disclosure of assets in SALNs—when others in government were most likely doing it as well.

“I believe it is our duty to resolve this ‘dilemma’ in favor of upholding the law and sound public policy,” said Enrile, one of the richest members of the upper chamber.

“If we were to agree with the respondent that he was correct in not disclosing the value of his foreign currency deposits because they are absolutely confidential, can we ever expect any SALN to be filed by public officials from here on to be more accurate and true than they are today?”

The House prosecution’s campaign to oust Corona gathered the support of all blocs in the Senate, including most members of Senator Manuel Villar’s Nacionalista Party group. Enrile’s so-called “macho bloc” consisting of Sotto, Estrada and Honasan all voted against Corona.

Not long ago, Villar waged a bitter campaign against Mr. Aquino during the 2010 presidential election. Thus, his vote was closely watched, considering that the President was considered the main architect of Corona’s removal.

He spent most of his speech on Tuesday, not to explain his vote, but to recall the vilification he had likewise suffered in public. In the end, his vote turned out to be to Mr. Aquino’s liking.

“I believe that CJ Corona is a good man,” he began, “but in this issue of the (Foreign Currency Deposit) account, he was wrong. I believe that the law applies equally to all, whether rich or poor, a member of the Supreme Court or an ordinary citizen.”

Senator Alan Peter Cayetano sought to simplify the issue against Corona and the Chief Justice’s invocation of the absolute confidentiality provision.

“If you did not disclose, we have to depose. If you are not fit, you cannot sit.”

Senator Aquilino “Koko” Pimentel III also pounced on the issue of equal application of the law.