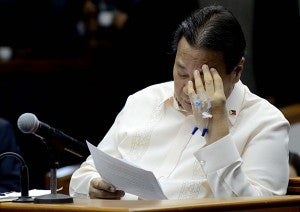 MANILA, Philippines — Far from the buzz at the Senate impeachment court, the upscale Medical City was quiet throughout, on Tuesday, as Chief Justice Renato Corona kept to himself at the hospital’s executive floor while his verdict was being read.

The media were kept away from Corona’s 15th floor room at the hospital, where he has been staying since last week after delivering a three-hour statement at the impeachment court.  He purportedly suffered hypoglycemia and doctors kept him confined to avert a possible heart attack.

No medical bulletin was issued by his doctors on Tuesday.

Corona was known to have been with his family and Supreme Court spokesperson Midas Marquez inside his room as the Senate impeachment court bared its 20-3 conviction against the magistrate in a four-hour proceeding.

At the hospital’s lobby, medical staff, patients and visitors went about the day like usual, the impeachment seemingly far away from their concerns.  At the laboratory’s waiting area, the television had a movie on.