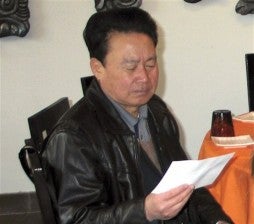 In this photo taken Feb. 4, 2006, and made available Monday, May 28, 2012, through his friends, Ya Weilin reads a paper at a restaurant in Beijing. Ya, the father of a man killed in the 1989 Tiananmen Square crackdown hanged himself in protest after two decades of failed attempts to seek government redress, a support group said Monday. AP PHOTO/FRIENDS OF YA WEILIN

BEIJING—The father of a 22-year-old man killed by Chinese soldiers during the 1989 crackdown on democracy demonstrations in Tiananmen Square has committed suicide, a support group said Monday.

Ya Weilin, 73, hung himself on Friday in a disused car park in Beijing, according to the Tiananmen Mothers, a group set up by relatives of the victims of the crackdown.

Ya, whose son Ya Aiguo was shot in the head on a Beijing street on June 3, had worked with the Tiananmen Mothers since the 1990s, signing open letters to the government and braving police intimidation and surveillance, the group said.

“The death of Ya Weilin and his son are tragedies directly wrought by the Chinese government,” the group said in an obituary. “The news of Mr. Ya’s death shocked us, like a sword piercing through our hearts.”

The obituary said Ya’s family had found an unfinished note that detailed his son’s death and his continued distress over the killing.

The note is now in the hands of police, said the Tiananmen Mothers.

Hundreds, if not thousands, of unarmed protesters and citizens lost their lives when China’s People’s Liberation Army crushed six weeks of unprecedented democracy protests in the heart of Beijing on June 3 and 4, 1989.

The Tiananmen Mothers have annually urged the Chinese government to overturn the official “counter-revolutionary rebellion” verdict on the 1989 protests, allow an independent inquiry into the crackdown and publish a full list of those killed.

The demands of the group have largely been met by silence or police intimidation.

Ya is survived by his wife and elder son.

Read Next
Estrada son, Arroyo ally weigh in on possible verdict on Corona
EDITORS' PICK
Unemployment rate up to 6% in May
House energy committee chair Arroyo bats for cheap electricity
High-risk pregnancy: Reducing your risk is in your hands
High inflation: Your P1 is now worth only 87 centavos
UK’s Boris Johnson will resign, BBC reports
Geek out at TOYCON 2022 powered by Smart Signature
MOST READ
Suspect in grisly killing of missing woman in Bulacan arrested
Kim Atienza’s daughter flaunts bikini body in response to critics of her ‘revealing photos’
Japanese artist who created ‘Yu-Gi-Oh!’ found dead in the sea
FDA probes popular Filipino noodle brand for ‘high level of ethylene oxide’
Don't miss out on the latest news and information.