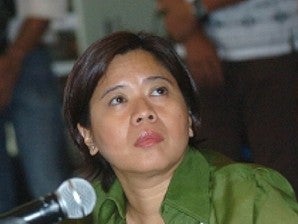 MANILA, Philippines—Running priest Fr. Robert Reyes has called on the public to rally behind Grace Padaca, the former governor of Isabela who has been ordered arrested on graft and malversation charges.

Reyes will hold a “Run for Grace” at 8 a.m. Sunday at the Quezon Memorial Circle and will officiate at a Mass in support of the beleaguered ex-governor.

Padaca was ordered arrested by the Sandiganbayan antigraft court last week, which set her bail at P70,000.

Reyes condemned the prosecution of Padaca, and believes that her political enemies are behind the cases filed against her.

He said Padaca was someone to emulate and who deserves the people’s support.

“We need good and upright leaders like former Isabela Gov. Grace Padaca. They also need the support of citizens who believe in them,” he said.

The Office of the Ombudsman last July charged Padaca with graft and malversation for the allegedly improper award of a P25-million project to a nongovernment organization, the Economic Development for Western Isabela and Northern Luzon Foundation Inc., for the management of a supervised credit facility for rice farmers. The contract was allegedly awarded without a public bidding.

Padaca has denied the charges, saying that her opponents in the 2007 election were behind her persecution. She argued that the public bidding requirement was not applicable in the rice project because this involved a government social program that would be adopted depending on the availability of implementing partners.

According to Reyes, Padaca is to be commended for her devotion to the poor farmers of Isabela and her efforts to help them become self-sufficient and stable.

“This was the type of governance she promoted, economic independence for small farmers through increased productivity and maximal earnings,” he said.

But he said the “old oligarchy” that she unseated when she first ran for office had used their old tricks to undo Padaca’s efforts.

“Using power and money, they can push and use an equally weak and corrupt justice system even against a righteous person. Thus the case and warrant of arrest against Grace Padaca. This is evil working against grace,” he said.

Padaca was a popular radio commentator who took on the Dys, the political clan that held sway over Isabela for almost 30 years. She soundly defeated the then governor, Faustino Dy Jr., for the governorship in 2004. She won reelection in 2007 against another Dy, Benjamin Dy, also a former governor, who protested the results.

In December 2009, the Commission on Elections declared Benjamin Dy the winner of the 2007 gubernatorial election after a recount and ordered Padaca to vacate the post.

Padaca’s party, Kaya Natin! Movement for Good Governance and Ethical Leadership, has thrown its support behind her, claiming that she was a victim of injustice.

Read Next
Bank robbed by its own security guard
EDITORS' PICK
Pangilinan worried missing Pharmally files may have been ‘cleaned’
Smart powers Liga Adarna Season 4: Race to the Top
Huawei’s relentless mission to bring ultimate health and wellness tracking for your fitness goals
Pharmally employee believes firm ‘swindled’ gov’t in delivery of face shields
Smart reaffirms 5G leadership as PH’s most reliable 5G mobile operator
Pharmally scandal: Due diligence failure overshadows debate on law
MOST READ
Robredo ready for backlash if she drops out of presidential race
Carpio sees Sara Duterte-Bongbong Marcos tandem ‘in the end’
Bongbong parrots Duterte on West PH Sea: We don’t stand a chance vs China
Heartbroken but not giving up: Robredo still pushing for united opposition for 2022 polls
Don't miss out on the latest news and information.