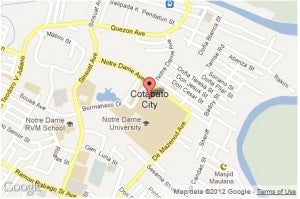 ALAMADA, North Cotabato – Typhoon Frank had brought so much devastation when it hit the country in 2008, but for the people of this sleepy town, they had something to thank the typhoon for.

“There was no waterfall visible at all. We only saw thick vegetation covering the side of the cliff,” Marlo Estella, a member of the Upper Dado council, said as he points to what has become known as Asik-Asik Falls. Asik is the Hiligaynon equivalent of the English word sprinkle.

Alamada Mayor Bartolome Latasa said the discovery of Asik-Asik Falls was ushered in by a multitude of events, starting with a forest fire that razed much of the vegetation of the area, including those that grew on the side of the cliff. Then there was a landslide that carved a large portion of the hill, which nearly uprooted the large trees.

The large trees that grew on the side of the cliff – including a large balete tree – were finally uprooted when Typhoon Frank slammed the country.

“A large portion of the face of the cliff gave way and a large volume of water suddenly burst from cracks. The largest crack, in which the water passes through,  have a dimension of 50×100 meters,” Estella said.

Latasa said what was baffling for the residents of Sitio Dulao was the fact that there was no river that ran on the flat portion of the hill above Asik-Asik Falls.

The area is made up of typical upland farms – dry, according to him.

“There was nothing that could indicate the origin of Asik-Asik Falls’ water,” Latasa said.

Estella said the nearest body of water was Lake Baranibud, 10 of kilometers away and located at the boundary of North Cotabato and Lanao del Sur.

“This remains a mystery to us,” he said.

The mystery of Asik-Asik Falls is overshadowed by its beauty. For most visitors, Estella said it did not matter where the water was coming from.

They were simply amazed at how it looked like, he said.

Since the opening of the falls to public access during the Holy Week this year, Estella said thousands of people had come to admire its beauty.

Estella said on weekends, the number of visitors – foreign and locals alike – could easily reach 1,000. On regular days, it would be about half that number.

North Cotabato Gov. Emmylou Talino-Mendoza said the provincial government has been working hand in hand with the Alamada town government to further develop the area into a major tourism site.

She said the provincial government has set aside funds for the project, including P1.5 million for a viewing post.

“We have just started the rehabilitation of the road to make this accessible to all vehicles going to the site,” Latasa said.