US confirms Chen has left China with family 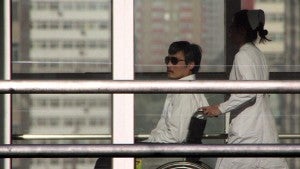 BEIJING—Blind Chinese activist Chen Guangcheng left China for the United States with his family on Saturday, the US State Department said.

The departure of Chen brings to an end a month-long diplomatic incident that began when he fled house arrest for the US embassy in Beijing and later said he wanted to leave China for his and his family’s safety.

“We can confirm that Chen Guangcheng, his wife and two children have departed China and are en route to the United States so he can pursue studies at an American university,” the department’s spokesperson Victoria Nuland said in a statement.

“We are looking forward to his arrival in the United States later today.

“We also express our appreciation for the manner in which we were able to resolve this matter and to support Mr. Chen’s desire to study in the US and pursue his goals.”

The 40-year-old self-taught lawyer arrived at the Beijing international airport earlier in the day, having left the hospital in the Chinese capital where he had stayed for over two weeks waiting for permission to leave.

Jiang Tianyong, a lawyer and close friend of Chen’s, said he talked to him just before 3 p.m. Beijing time (0700 GMT) and learned that he and his family has received the passports promised by the Chinese authorities.