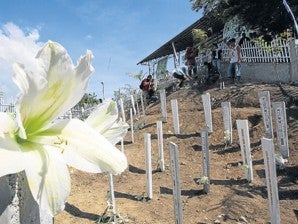 The Maguindanao massacre in Nov. 23, 2009 left 57 people dead, most of whom were journalists. File photo

MANILA, Philippines—Quezon City court has set aside four days this month to let Andal Ampatuan Jr.’s lawyers question seven witnesses on the killing of only one of the 57 victims of the Maguindanao massacre.

Judge Jocelyn Solis-Reyes of Regional Trial Court Branch 221  allowed the cross-examination  to be conducted on May 23, 24, 30 and 31.

The hearings will be held at Camp Bagong Diwa in Taguig City, according to the three-page order dated May 17.

The questions to the witnesses will pertain only to the 57th victim, UNTV reporter Victor Nunez, under criminal case No. Q-10-163766.

On November 23, 2009, 57 persons were brutally murdered in Barangay Salman, Ampatuan town in Maguindanao. They included mostly women relatives and followers, including some lawyers, of Mangudadatu and  32 media workers.

The group was traveling in a convoy to Mangundadatu’s certificate of candidacy for governor of Maguindanao when they were blocked by armed men. Mangundadatu was challenging Andal Ampatuan Jr. for the political leadership of the province.

Andal Jr., the primary accused, asked the court to set aside dates for his lawyers to question  witnesses but only with respect to the killing of Nunez. The murder case arising from the killing of Nuñez was the last filed by prosecutors, thus identifying Nuñez as the 57th victim.

The defense said their client’s right to confront witnesses for the last case entitled them to cross examine the witnesses anew, regardless of the extent of the defense’s questioning in the first 56 cases.

The court noted that on December 1, 2010, then lead prosecutor Richard Anthony Fadullon adopted the testimonies of the witnesses, including accused Mohammad Sangki, as evidence in the Nunez case, which was filed a bit later.

First to testify was Diaz, then chief of the NBI counter-terrorism unit who took the testimonies of several witnesses and gave the court a flash drive of photos taken by the military of the crime scene.

Rodaje, his colleague, was the one who performed autopsies on eight victims, including Mangundadatu’s wife.

Mohammad, a Sangguniang Bayan official in Datu Abdullah Sangki, corroborated the account of his nephew Rasul. Both Sangkis tagged the Ampatuans in all the 57 murders.

Atanoso was a videographer from the Sultan Kudarat Provincial Planning and Development Office who took footage of the massacre site.

Lizada and Latina testified on the cellphone billing statements of Mangundadatu and his wife, who called him up to tell him of their convoy’s abduction, allegedly by the Ampatuans.

The prosecution objected to the cross examination of Mohammad because of his petition for certiorari in  the Court of Appeals and of Rodaje as his testimony in February  2010 focused on Mangundadatu’s wife.

They noted that Rodaje was not the medico-legal officer who autopsied Nunez.

The prosecution added that there should be additional direct testimony to cover the 57th case.

The judge pointed out that the prosecutors did not raise this issue in their pleadings related to orders dated November 10, 2011 and March 1, 2012.

As to Rodaje, the judge said it was only proper that the NBI doctor be cross-examined as he was presented as one of the witnesses in the opposition to Andal Jr.’s petition for bail and that Rodaje’s testimony was adopted for Nunez’s case.

In Mohammad’s case, Reyes said the prosecution may defer his turn until the Court of Appeals resolves his petition.