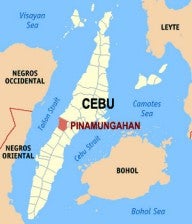 PINAMUNGAHAN, Cebu – Angeliza Abadies was doing her usual chores at her home here at about 1 p.m. Thursday when the bright skies suddenly turned gloomy.

Then there was thunder and lightning followed by heavy rain and strong wind.

Suddenly, Abadies heard what sounded like solid objects hitting the roof of her shanty. To her surprise, hundreds of ice pellets, each the size of a thumb, fell from the skies.

“Kusog ang huros sa hangin. Dili ko makatukod sa kakusog … Nagdahunog [The wind was so strong. I couldn’t even lean on something because of the force of the wind],” said Abadies, 57.

The wind and hail lasted for 10 to 20 minutes. When it was over, 10 houses were destroyed while 170 others were damaged in Barangay Lamac, Pinamungahan town, 64.8 km southwest of Cebu City.

Lamac village chairperson Maria Flores Cantero said that based on their tally, 94 households had been displaced. Most of the houses that were destroyed were made of light materials.

Centero said her resthouse was swept about 15 meters. The carpenters who were working inside it suffered bruises, she added.

Abadies said her daughter Juliet Dimol, 23, who was three months pregnant, and four-year-old grandson, Jonvic, were inside their house when it was swept by the wind.

The house was found along the road, beside a young mango tree, some five meters from where it was uprooted.

Abadies found her daughter curled up in a ball trying to protect her son. While the boy was not harmed, Abadies was worried about the condition of her daughter who suffered bruises and complained of body aches.

She said Dimol’ fell hard on her back when the house slammed to the ground.

“No one expected that it was coming. We were unprepared,” said Abadies.

She said it was the first time that such an incident happened in Barangay Lamac in the 20 years they had been residents of the village.

A weather observer of the Philippine Atmospheric, Geophysical and Astronomical Services Administration (Pagasa) based on Mactan Island, Cebu, admitted that what happened in Pinamungahan was unusual because hail usually occurs in temperate regions and not a tropical country like the Philippines.

When the ice crystals were released by the clouds, they didn’t melt into water because the clouds were too close to the ground at about 480 meters, he said.

For the ice crystals to melt and become rain, Artiaga said the clouds should at least be one kilometer above the earth’s surface.