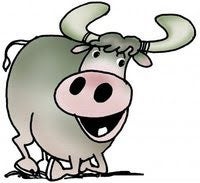 LUCBAN, Quezon–Guyito, the popular carabao (water buffalo) mascot of the Inquirer hit it off with fiesta revelers in the annual “Pahiyas” here Tuesday.

Like a celebrant, Guyito was mobbed, hugged and photographed by townsfolk and visitors in every stop of the annual parade “Bikas Gayak,” which snaked along the busy streets of this town at the foot of Mount Banahaw, 160 kilometers south of Manila.

Anna Virtucio, a housewife from Sta. Cruz, Laguna, with daughter in tow, jostled her way to pose with Guyito during the “Pahiyas” festival, which coincided with the annual celebration on the feast of San Isidro, the patron saint of farmers, held every May 15.

The Inquirer sponsored the “Bikas-Gayak” (“well-adorned”) parade—now in its fourth year—with the participation of at least 19 carabaos, each pulling its own wooden sledge (paragos) festooned with fresh vegetables, fruits and flowers.

The Inquirer’s carabao mascot rode one of the sledges and led the parade of the national animal. Guyito also mingled with children and executed fancy dance moves to the tune of bouncy music blaring at the town plaza.

“Our primary aim here is to give tribute to the farmer and his working ally, his carabao, said Erwin Reyes, Inquirer’s senior assistant development officer.

He added that the company, in giving focus to one of the Philippines’ most popular Maytime festivals, wants to contribute to tourism development efforts, as well.

Farmers with their decorated wooden sledges joined several other parade participants including town vendors of the famous pancit “hab-hab,” town officials, local beauties and escorts, and youth and senior citizens. Several higantes (giant figures made of papier maché) mascots of some local businesses were also part of the parade.

Librado Jurlan, a farmer from the village of Kulapi and one of the “Bikas-Gayak’ participants, occasionally splashed his water buffalo “Ama” (Filipino for father) with pails of cool water from flowing canals along the side streets, while his nine-year-old son Ivan held the rope.

The farmer said the animal, which has been with the family for five years now, is comfortable with Ivan since the boy also gives the carabao his daily bath along the river.

Like any Filipino farmer, the carabao is an indispensable companion in the farm that works the muddy rice field, hauling farm produce with the sledge, oftentimes serving as a family vehicle to transport children to school or in going to the village chapel on Sundays and in nearby villages.

“This is my first time to join the contest. I reserved my best farm produce to decorate my sledge for this event,” Jurlan said.

Another entry, farmer Voltaire Nañola from Barangay (village) Atolinao, who works on a four-hectare farm he owns, said the feast is really for the farmers as “without us, the people will go hungry.”

He lamented, however, of poor harvest this year due he said to poor soil.

He said they were told by the Department of Agriculture that it has a program for soil tests to determine crops suited for planting.

“We used to pay P2,000 to P3,000 to the technician who examines our farm. With the poor harvest, the amount (contest pot) is really something for us,” said De las Alas.