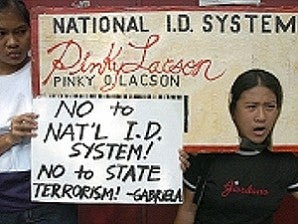 MANILA, Philippines—The Philippine National Police on Tuesday welcomed moves in the House of Representatives to revive a controversial bill to establish a national identification card system, saying its implementation would boost law enforcement.

Chief Superintendent Agrimero Cruz Jr., director of the PNP’s Community Relations Group and one of the PNP spokespersons, said a national ID system would make it easier for investigators to locate fugitives or determine if somebody had a criminal record.

“That’s good news for the PNP because we will be able to solve more crimes if there is a national ID system,” Cruz said when asked to comment on reports that the House Committee on Revision on Laws was pushing the revival of the bill following its failure to gain ground in past administrations.

“It will make it easier to track down criminals who hide behind aliases, and our countrymen will find it easier to recognize criminals even in the most far-flung villages,” he said in an interview with reporters at Camp Crame.

Critics have expressed fears that a national ID system can compromise privacy rights and may be used by the government to spy on political opponents.

But Cruz said he did not believe privacy rights would be violated by the proposal at all.

“I don’t think they will put personal data on the ID, except the standard requirements like birthplace, picture,” he said.

“If the ID identifies someone as a businessman or a government employee, it doesn’t mean they will become the target of a crime immediately. There are so many businessmen. Of course, we won’t put information on their income or income tax on the ID,” Cruz said.

The official said a unified ID system would be very convenient for both government and its citizens.

“Our lawmakers have seen that we have too many ID cards. We have SSS (Social Security System); we have GSIS (Government Service Insurance System); we have PRC (Professional Regulation Commission), we have driver’s licenses, and other clearances,” he said.

“If all these can be put in one ID, it will be convenient to our countrymen. Imagine a clearance issued in Mindanao can still be used in northern Luzon, and can be used not only once but multiple times,” Cruz said.

Cruz cited the national identification systems of Singapore and England as two examples of a successful system helping maintain peace and order among their citizens.

He, however, stressed that the PNP would leave it to Congress whether to pass the bill or not.