Ombudsman: Corona gave me blanket authority to probe his assets 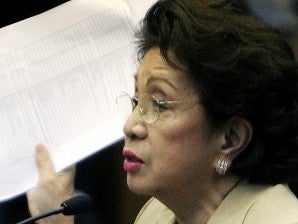 MANILA, Philippines—Ombudsman Conchita Carpio-Morales on Tuesday said no less than Chief Justice Renato Corona gave her a “blanket authority” to look into his wealth that led her to the discovery of multi-million dollar accounts that the Chief Justice had allegedly owned .

“The Chief Justice himself authorized the Ombudsman in his SALN to determine from other government agencies any assets, any properties, liabilities, net worth , business interests from the time he joined the government up to the present,” Morales said on the second day that she testified in the impeachment trial of Corona.

SALN stands for statement of assets, liabilities, and net worth.

“And so that was the clincher. I thought I should write a letter to the AMLC (Anti-Money Laundering Council) to seek help for any assistance or for any documents that had a bearing on the charges against the Chief Justice,” Morales said.

The Ombudsman was responding to a question of private prosecutor Mario Bautista, who was cross-examining her testimony, as to the reason why she sought the assistance of the AMLC in her investigation into alleged bank deposits of the Chief Justice .

Morales was presented as a “hostile” witness by Corona’s camp.

“To me, that’s a blanket authority,” she further said of Corona’s “authority.

Aside from Corona’s authority, Morales also cited a provision in the Ombudsman Act, which authorizes her to seek the attendance of government agencies in her investigation.

It was Senator Franklin Drilon, who told reporters before the trial, who said that the Ombudsman has the authority to look into Corona’s assets, citing a waiver in the SALN form of Corona and other government employees, who are required to file their SALNs every year.

“The Ombudsman under that waiver is authorized to inquire into records of government agencies, that includes AMLC because AMLC is a government office,” he further said.

Drilon was reacting to questions raised at how Ombudsman Conchita Carpio-Morales obtained a report from the AMLC, which showed that Corona allegedly owned 82 dollar accounts in five banks and “fresh deposits” of more than $12 million.

Senator Ferdinand “Bong-Bong” Marcos himself questioned how the Ombudsman managed to get the information from the AMLC without a court order.

“I think we should ask the Ombudsman is this is the new policy? Is this a new doctrine that in fact on the basis of the complaint that the Ombudsman can already gain the information from the AMLC and publicize that information?” Marcos said in a separate interview.

But Drilon said there was no need for the Ombudsman to get a court order, citing the waiver in the SALN form.

Marcos, who has been critical with the Aquino administration, shared some opinion that there was a concerted effort on the part of the government to impeach the Chief Justice.

“Well, certainly there are forces that are coming together to make sure that the Chief Justice is impeached but palagay ko wala namang magugulat kung masasabi natin na talagang tinatrabaho ng gobyerno na tanggalin si CJ (I think, no one will be surprised if we say that the government is working together to remove the Chief Justice),” he added when asked if he thinks the government has conspired against Corona.