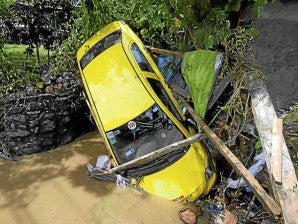 DAVAO’S ‘ONDOY’. A taxicab lies in a ditch after it was dragged by rampaging waters caused by 3 hours of heavy rains in Davao City. BING GONZALES/INQUIRER MINDANAO

DAVAO CITY, Philippines—In the middle of darkness, young couple Roque Palomar and his wife Raciel paddled through the floodwater, desperate to bring themselves and their 3-month-old son, Mark Louie, to safety.

They grabbed anything that floated to help them through the flood. A banana trunk led them through a fruit tree across the rambling river. They never thought they would survive but clinging to the tree gave little relief, Raciel said.

“Our baby was crying and he was unstoppable,” she said.

As of 2 p.m. Wednesday, the couple were still in the dark and confused over what happened.

What’s worse, hours after their village in Matina—called Arroyo Compound—was hit by a flash flood, the baby was still nowhere to be found.

The civil-military operations unit of the 10th Infantry Division, quoting the city’s social services and development office, said the number of bodies recovered reached 25, and that 15 others remained missing as of 4:45 p.m. on Wednesday.

Three of the bodies—a boy, a girl and an adult female—remained unidentified.

The Palomars had been out in the waters since past 11 p.m. on Tuesday, after their shanty was engulfed by rampaging waters. The 23-year-old father closely held his son. Beside him was his 18-year-old wife. They are still searching for their son.

Along with their relatives, Roque and Raciel checked every funeral home in search for the baby who “was wearing a blue shirt and jersey shorts.”

At Collado Funeral Parlor, where 15 bodies were brought, the couple met other families and relatives of flood victims but left with a heavy heart. Their baby was nowhere.

Queried by journalists, Raciel gave a blank stare. Roque, on the other hand, was a picture of devastation.

Seven bodies were brought to the Angel Funeral Homes.

On Tuesday, three-hour rains lashed Davao City until past 1 a.m., spawning a flash flood that brought Matina under water. Worst hit was the Arroyo Compound in Matina Pangi.

Some residents had to climb to the roofs of their houses to await rescue. Others braved the floods to look for high ground.

A relative of the Baricuatros said the family moved to the Arroyo Compound just last week, also in time for the wedding of the victims’ parents, Alex and Adora. Only Alex survived the tragedy.

At the funeral house, the grieving Alex—wearing a bright red shirt with the words Happy Birthday on the back—was inconsolable when he saw his children and wife already dead.

At the time the water was rising, Alex went outside to check but was shocked to see his house bobbing in the water, claimed by the river with his wife and two children.

Another man, Rene Ayag, a construction worker, lost two of his children—Rachel, 5 and Kenneth, 4.

“I was holding them in my arms as we crossed flooded streets to go to a safe area, but a huge log blocked our way,” he said.

Survivors of the flood recalled that the waters rose quickly that they swallowed entire houses. It happened while most of them were deep in sleep.

Mayor Sara Duterte said the floods left 19 people dead and four others remain missing. As of 4 p.m., however, the city social welfare and development office said the number of fatalities has risen to 25 and 15 of them are children.

“More than shock, the tragedy left me feeling the loss and the pain of the survivors. I feel for the parents who blame themselves for failing to save their children. I feel the pain of those who suffered from something that is beyond our control,” Duterte said.

The mayor said the flood, unlike previous ones, was not triggered by the lingering drainage problem of the city but by “the overflowing river caused by the heavy rain.”

He said the city government might declare a state of calamity.

The flood-hit villages are Matina Pangi, Matina Aplaya and Bangkal—all under the Talomo District.

The flood has receded, but left residents with damaged or destroyed houses.

Davao Light and Power Co. (DLPC) asked residents to clean their electric sockets of grime before switching on power in their homes to prevent electrocution.

Rodger Velasco, DLPC vice president for engineering, said DLPC switched off power in the area at the height of the floods.

While DLPC has restored power, engineers were still checking flooded areas to make sure it was safe to switch on the power.

“We cannot just do this unless we are certain that it is safe,” said Velasco. Jeffrey M. Tupas, Dennis Jay Santos and Germelina Lacorte, Inquirer Mindanao