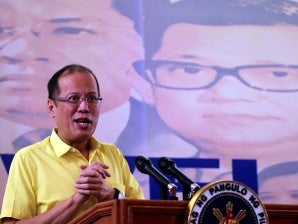 DAVAO CITY, Philippine—Saying the Scarborough Shoal has already suffered some ecological damage, President Benigno Aquino III on Monday welcomed China’s declaration of a fishing ban in most of the West Philippine Sea (South China Sea) and indicated that Filipino fishermen would be also asked to refrain from fishing in the contentious territory.

Addressing the media following a speech on rural development program in Mindanao, the Chief Executive answered in the affirmative when asked if the Filipino fishers would be asked to stop fishing at the disputed shoal.

“Yes. And the [Bureau of Fisheries and Aquatic Resources] is supposed to be using some device that will improve fishing conditions elsewhere for our fishermen especially those from Masinloc in the Zambales area and some from the Pangasinan area,” Mr. Aquino said.

The President said the Philippine Coast Guard and the BFAR has reported some discoloration in the shoal.

“There seems to have been damage to the system … So you want to help the ecosystem to recover and a ban would help in the process,” Mr. Aquino said.

China has announced a fishing ban in most of what it calls the South China Sea. The ban will run from May 16 to Aug. 1.

The fishing ban comes amid a standoff between Philippine and Chinese authorities at the Scarborough Shoal.