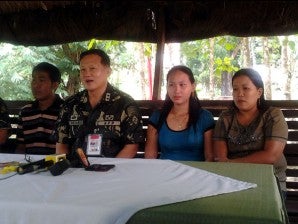 CAMP CAPINPIN – Five of the 43 health workers accused of being communists are willing to testify that their rights were not violated by the military following their arrest and detention in 2010.

“Sana mag isip isip sila. Masisira lang ang buhay nila [They should think things over. Their lives will be ruined],” Jenelyn Pizarro, one of the five, said in a press conference Saturday.

The five chose to stay here as volunteers even after President Benigno Aquino III ordered their release although two have since gone back to their families but expressed willingness to testify.

The three remaining health workers reiterated that there was no torture by the military, contrary to what eight of their comrades have claimed. On May 3, eight of what has been known as “Morong 43” filed a complaint against former President Gloria Macapagal-Arroyo and 18 others for human rights violations during their incarceration.

“We welcome this development. Para makita sa husgado at mapatunayan [that those are merely  allegations],” he told reporters.

The 43 health workers were arrested in Morong, Rizal on Feb. 6, 2010 by the police and military after being accused of undergoing training for bomb-making as members of New People’s Army.