Morales: I’ll tell everything about $10M 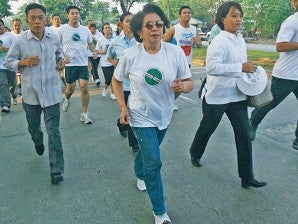 FOR CLEAN GOV’T. Ombudsman Conchita Carpio Morales leads a short Run Against Corruption at the Office of the Ombudsman on Wednesday. Running with her are more than 100 people calling for the truth, especially in the impeachment trial of Chief Justice Renato Corona. MARIANNE BERMUDEZ

Ombudsman Conchita Carpio Morales will take the witness stand in the impeachment trial of Chief Justice Renato Corona and will disclose all that is necessary about her request for him to answer allegations from complainants about his alleged $10 million in foreign currency accounts.

Asked if the $10-million figure came from the complainants, Morales told the media to wait for her testimony before the Senate.

Morales, a former colleague of Corona in the Supreme Court, Wednesday told reporters that she would heed the Senate’s subpoena to appear at the trial.

Morales Wednesday said the Ombudsman’s mandate was to evaluate the three complaints filed against Corona before her office to see if they can give leads to charges.

She said it was also her mandate to ask Corona to respond to the complaints if she believed that there was a need for further investigation.

“If the Ombudsman believes that after evaluating the complaints and the supporting documents, that there is ground to conduct further—I want to emphasize the word further—investigation, then we notify the respondents, the impeachable official to answer or comment on the complaint,” Morales said.

Under the law, the respondent should submit an answer within 72 hours from receipt of the Ombudsman’s directive.

“I will tell everything there that is material and relevant to my request for the CJ to answer,” she said.

She said that as of Tuesday, Corona had filed no answer to the complaints. She added that he may have sent one by mail and if he did, it might still be on the way to the agency.

“If I am subpoenaed by the Senate, I will obey the Senate,” Morales told reporters as she walked on Agham Road in Quezon City for the Office of the Ombudsman’s indignation march against corruption, among the activities for the agency’s 24th anniversary.

“It is just right for a citizen to obey the orders of duly constituted authorities,” said Morales, before whom Benigno Aquino III took his oath of office as the country’s 15th President in June 30,2010 when she was an associate justice.

The request of Corona’s camp to subpoena the Ombudsman was made after it came to light that she had asked the Chief Justice to respond to allegations that he kept $10 million in foreign currency accounts, an amount supposedly disproportionate to his income.

Corona has denied having $10 million in his accounts and has claimed that the Ombudsman has no jurisdiction over him.

Defense counsel Jose Roy III told the Senate on Tuesday that Corona would testify on the $10 million, and requested that the impeachment court subpoena Morales and 10 others in connection with the alleged foreign currency accounts.

The defense said that it would prove that the Chief Justice was not keeping $10 million in bank accounts and that the Ombudsman’s inquiry into the accounts overlapped with the impeachment trial.

Corona is accused of failing to disclose his statement of assets, liabilities and net worth (SALN) and his wealth; favoring the Philippine Airlines over the 1998 retrenchment of 1,400 flight attendants; and clearing former President Gloria Macapagal-Arroyo to travel abroad in 2011 and avoid charges of electoral sabotage.

The prosecution’s earlier attempt to look into Corona’s foreign currency accounts was thwarted after the Supreme Court issued a temporary restraining order that stopped the Senate from compelling Philippine Savings Bank to disclose the records of his dollar deposits.

“Although there is talk of $10 million, the scope of questioning from the entire judges would be the entirety of the impeachment. He can’t escape that,” Sen. Aquilino “Koko” Pimentel III said in an interview.

Sen. Franklin Drilon said: “It is not limited to $10 million because anything relevant will be propounded to him.”

Senate President Juan Ponce Enrile said he expected Corona to respond to questions because he had consistently declared that he would “bare all.”

“It’s up to the Chief Justice to defend himself or not,” he told reporters on the prospects of the defense limiting questions on the $10 million. “It’s up to them. I will not teach them how to defend their client. They cannot control the decision of the court.”

Once Corona takes the witness stand, there was no stopping the senator judges from throwing any question at him, Pimentel said.

By appearing before the impeachment court, Corona is deemed to have waived his right on the secrecy of his foreign currency accounts, the senators said.

Drilon agreed: “We don’t have to compel him. He already said that he is willing to open this (dollar account) and we hope that he remains true to that commitment.”

“We are not going to be abrasive or disrespectful. We will grant him all courtesies due him as Chief Justice of the Supreme Court. There’s no one who will insult him or be rude to him. We will treat him with utmost deference,” Enrile said.

The same goes with the Ombudsman, Enrile said.

The senators said there was no need to amend the impeachment complaint because the alleged $10 million would fall within the allegation of nondisclosure of assets.

“If there is $10 million in the account, the characterization of that amount regarding its source is immaterial. We only characterize it as asset. Was it included in the SALN or not? We’re talking about noninclusion,” Enrile said.

Drilon said: “The issue is the failure to report the assets. If indeed the assets are shown to be disproportionate and far in excess of his income then there arises a presumption under Section 8 of the antigraft law that it is ill-gotten.”

Pimentel said that even the defense admitted that the $10 million might be construed as ill-gotten and hence, should be explained.

“The presumption of ill-gotten wealth kicks in if sufficient evidence is already in. That should be the concern of the defense,” he said.