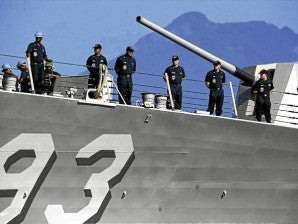 (BIG) GUN DIPLOMACY US Navy personnel stand in formation on board the guided-missile destroyer USS Chung Hoon in Puerto Princesa on Tuesday at the launch of the US-Philippine joint naval military exercise near the disputed Spratly Islands. The actual exercises will happen in the Sulu Sea. The 11-day event will see two US missile destroyers patrol Philippine waters close to the resource-rich and strategically vital West Philippine Sea. AFP

Puerto Princesa—Longtime allies the Philippines and the United States launched naval exercises on Tuesday amid warnings that growing incidents at sea involving China could lead to war in Asia.

Two state-of-the-art US missile destroyers sailed into Philippine waters to kick-start the 11 days of training, being held in the wake of regional tensions caused by territorial rivalries in the West Philippine (South China) Sea.

Both the Philippines and United States emphasized the training was an annual one aimed at strengthening defense ties, and not linked to the rising concern in Manila about allegedly aggressive Chinese actions in the potentially resource-rich Spratly Islands.

“Carat was planned in advance… the issue in the South China Sea started in February,” Philippine Navy vice commander Rear Adm. Orwen Corez said at the opening ceremony. “Carat has nothing to do with the issue.”

Nevertheless, the exercises were portrayed as a show of unity between the Philippines and its former colonial ruler.

“The US and the Philippines are allies and that is the strongest and most enduring commitment the two nations can make,” the commander of the US 7th Fleet, Vice Adm. Scott Van Buskirk, said.

“Our alliance is underpinned by a deep and abiding US interest in the freedom and security of the Republic of the Philippines.”

Buskirk stressed the exercise “has nothing to do with the Spratlys.”

He said it was the second such exercise held by the two allies “but this situation is more complex.” He did not elaborate.

Tuesday’s opening ceremony took place at a military base in Puerto Princesa, the capital of Palawan province, a narrow island that divides the West Philippine Sea and the Sulu Sea.

About 800 US sailors are involved, as well as the two guided missile destroyers and a salvage ship. They will join a Philippine fleet of mainly World War II-era ships.

As the exercises got underway, an Australian think tank warned risks were growing like incidents at sea involving China that could spark a war in Asia, potentially drawing in the United States and other powers.

The Lowy Institute said in a report that the Chinese military’s risk-taking behavior in the seas, along with the country’s resource needs and greater assertiveness, had raised the chances of an armed conflict.

“China’s frictions with the United States, Japan and India are likely to persist and intensify. As the number and tempo of incidents increase, so does the likelihood that an episode will escalate to armed confrontation, diplomatic crisis or possibly even conflict,” the report said.

In Washington, the US Senate passed on Monday a resolution that deplored China’s use of force against Vietnamese and Philippine ships.

Sen. Jim Webb, chair of an East Asian and Pacific affairs subcommittee of the Senate Foreign Relations Committee, said “a growing number of nations around the South China Sea are now voicing serious concerns about China’s pattern of intimidation.”

President Aquino this month called for US help in containing China’s ambitions, saying his country was too weak to stand up to the Chinese alone.

Mr. Aquino made his plea after accusing China of inciting at least seven recent incidents in the disputed Spratly waters, including one in which a Chinese vessel allegedly opened fire on Filipino fishermen.

US Secretary of State Hillary Clinton last week offered the Philippines’ some comfort, pledging that the superpower would help to modernize the cash-strapped Philippine military.

China, the Philippines, Vietnam, Brunei, Malaysia and Taiwan have overlapping claims to parts of the West Philippine Sea, which is believed to have vast oil and gas deposits, while its shipping lanes are vital for global trade. Redempto Anda, Inquirer Southern Luzon; AFP and Reuters