LIMA – A fire killed 14 people trapped in a locked down drug rehabilitation center east of Lima with no means of escape, the city’s fire department said Saturday. 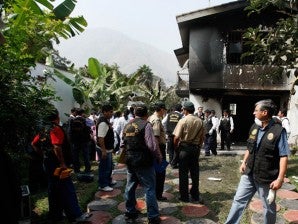 Police officers stand outside the site of a pre-dawn blaze, at the Sacred Heart of Jesus clinic in Chosica, Peru, Saturday, May 5, 2012. A fire swept through the rehabilitation center for addicts near the Peruvian capital of Lima and officials say at least 14 people are dead. AP/KAREL NAVARRO

“They have found 14 bodies and one person survived,” said spokeswoman Elena Cabello of the fire in Chosica, 30 kilometers (19 miles) east of the capital.

The fire broke in the early morning hours at the Sacred Heart of Jesus rehabilitation center, which was housed in a two-story building, said Fernando Campos, the head of the firefighting unit on the scene.

“The doors were locked and the windows on the second floor had bars on them. It wasn’t possible for people to get out,” said Campos.

He said 13 bodies were found on the second floor of the building and one on the first floor. The cause of the fire was unknown.

The sole survivor was identified as Luis Zeballos.

The blaze comes just three months after 29 people were killed in a fire at another Peruvian drug rehabilitation center.