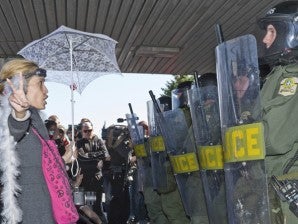 Students protest on May 5, 2012 in Victoriaville, Canada, where Quebec's liberal party is holding its annual convention. The government of the French-speaking province of Quebec and student groups clinched a roadmap agreement May 5 to put an end to 12 weeks of often violent protests over tuition hikes, officials said. The deal came after some 23 hours of arduous negotiations between Education Minister Line Beauchamp and four major Quebec student groups, and just hours after clashes in Victoriaville that left nine people injured and ended with 106 arrests outside the Quebec Liberal Party's annual convention. AFP PHOTO / ROGERIO BARBOSA

Three of the students were rushed to hospital with head injuries, but officials said they were in stable condition.

One protester, identified as a student at Cegep de Saint-Laurent university in Montreal, lost the use of his eye, medical officials said.

The ear of another student was also severely cut, according to witnesses.

“We were on top of the little hill behind the protests and there was a guy with a bloody ear,” said Shania, who attended Friday’s demonstration and would not provide her last name.

The protests were among the most violent since mid-February, when students took to the streets to protest the Quebec government’s plans to raise university fees by $1,625 over five years as part of an effort to rein in the budget deficit.

People toward the back of the demo were peaceful, a protester who gave her name as Tania told AFP.

“I don’t understand how you can justify police who are supposed to be protecting the convention ending up in an area further away,” Tania said.

But police spokesman Captain Jean Finet told reporters that the officers had “used the necessary force to ensure citizens’ safety.”

In one exchange, demonstrators attacked and beat a police officer, according to local media, which said the officer did not suffer serious injuries.

Police attributed the violence to a small group of troublemakers among the protesters.

Provincial police had initially arrested four people during the protest in front of the Victoriaville convention center, where Premier Jean Charest’s party was holding its annual meeting.

More protesters were in Victoriaville for the second day of the Quebec Liberal Party’s convention.

The clashes come as student groups and the Quebec government resumed talks Friday to put an end to 12 weeks of demonstrations and seemed near to an agreement.

Quebec’s three main student groups have mobilized some 170,000 students who are refusing to go to class until the matter is resolved.