Japan to go nuclear-free for first time since 1970 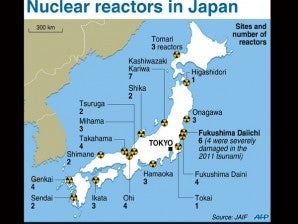 Graphic showing Japan's nuclear power plants. The country will be nuclear-free on Saturday when it shuts down its last reactor for maintenance work.

TOKYO – Japan is set to go without nuclear energy for the first time since 1970 from Saturday, when the last operating reactor shuts down for maintenance, heightening fears of a looming power crunch this summer.

Only one of Japan’s 50 reactors – at the Tomari nuclear plant in northernmost Hokkaido – is operating at present, but it is scheduled to stop for maintenance work which will last more than 70 days.

Resource-hungry Japan once relied on nuclear energy for about one-third of its electricity demand, until a massive earthquake and tsunami in March last year caused reactor meltdowns at the Fukushima Daiichi plant.

There is lingering public distrust over nuclear energy since Fukushima and all but the one reactor at the Tomari plant are suspended for extra safety checks.

Workers at the Tomari plant will move the control rod into reactor No. 3 at about 5:00 p.m. (0800 GMT) on Saturday, which will lower power generation to zero, a spokesman at Hokkaido Electric Power Co. said.

The long-term future of the reactor remains uncertain.

The government of Prime Minister Yoshihiko Noda has said two of the offline units at the Oi nuclear power plant, western Japan, are safe enough to restart and that they could help prevent power shortages in the hot summer months.

A series of anti-nuclear power demonstrations are planned on Saturday, the Children’s Day national holiday in Japan, calling for a safer future for future generations.

Dutertismo and the war on drugs