What Went Before: The arrest of the ‘Morong 43’ | Inquirer News
Close
menu
search

What Went Before: The arrest of the ‘Morong 43’ 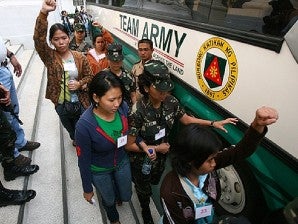 One of the 43 health workers arrested by the military in a raid in Morong raises a clenched fist as they are returned to their bus on their way to Camp Capinpin Detention facility in Tanay, Rizal. INQUIRER FILE PHOTO

The “Morong 43” is a group of health workers who were arrested by the military and police at a resort in Morong, Rizal province, on Feb. 6, 2010, on suspicion of being communist cadres.

The military said guns and explosives were found at the site, as the group were attending a bomb-making seminar. The 43, which included 26 women, were brought to Camp Capinpin in nearby Tanay town.

The resort owner, however, said those arrested were attending a training course organized by the nongovernment organization Council for Health Development.

Two days later, relatives of the detainees filed a petition for a writ of habeas corpus in the Court of Appeals.

On Feb. 9, then Commission on Human Rights (CHR) Chairperson Leila de Lima accused the military of subjecting the 43 to “psychological torture.” She said the 43 were also denied the right to counsel despite repeated demands for a lawyer during interrogation.

The Supreme Court ordered the military and the police to present the 43 to the Court of Appeals. But the military failed to do so on Feb. 12, citing the lack of time to coordinate  security measures.

On Feb. 26, the CHR summoned officials from the military, police and judiciary in connection with its investigation of the Morong 43’s torture allegations. The commission asked them to personally appear before it on March 18 “under the pain of contempt.” Then President Gloria Macapagal-Arroyo, among others, was asked to file her comment.

On March 10, the Court of Appeals dismissed the Morong 43’s petition for habeas corpus, saying it could no longer question their detention once criminal charges had been filed against them in court, regardless of irregularities in their arrest and inquest.

At that time, the military filed charges of illegal possession of firearms against the detainees in the Morong Regional Trial Court, allegations that the detainees also denied.

On March 18, only two military officials appeared at the CHR hearing. Military lawyers argued that while military custodians were willing to present the health workers, a court order was needed for their temporary release. De Lima countered that a court order was not required to produce witnesses and complainants at a CHR hearing.

Thirty-eight of the Morong 43 were scheduled to be transferred to Metro Manila on April 9 in line with a Morong RTC order, but police refused to take them in custody, saying the jail in Camp Crame was overcrowded. The 38 were finally moved out of Tanay to the Metro Manila District Jail at Camp Bagong Diwa in Taguig City on May 1.

According to the military, five of the 43 admitted to being members of the New People’s Army (NPA) and were being considered state witnesses.

On July 6, President Aquino directed De Lima, who had been named justice secretary, to review the Morong 43 case, including a plea to immediately release two pregnant women. The two eventually gave birth in the course of their detention and were allowed to be under hospital arrest.

On Dec. 3, the rest of the detainees began a hunger strike to demand their freedom. Before Christmas, 38 of the 43 detained were finally released upon the order of Mr. Aquino to withdraw the criminal information against them.

The CHR said the detainees were arrested on the basis of a defective arrest warrant.

Five of the original detainees, who reportedly admitted to being members of the NPA, are under military custody at Camp Capinpin in Rizal.

On April 4, 2011, six members of the Morong 43 lodged a P15-million civil suit against Arroyo, now a Pampanga representative, and 10 others for illegal arrest and torture.

In June, the health workers asked the court to issue a writ of preliminary attachment to freeze P15 million worth of properties of the defendants until the court resolves the case.

In September, Judge Ma. Luisa Quijano-Padilla of Regional Trial Court Branch 226 denied the health workers’ application for a writ of preliminary attachment, but ordered Arroyo and the 10 other defendants to answer the damage suit against them.

In January 2012, Arroyo, through her lawyers, asked the Quezon City court to dismiss the civil suit against her, saying the complainants failed to state a cause of action for the civil suit. She added that the plaintiffs could not just sue her based on her past position as president or her alleged failure to stop any supposed abuses.

The Morong 43, however, countered that they had adequately stated the cause of action in their suit against Arroyo and that she knew the implementation of the national security plan. Inquirer Research