Occupy protesters detained in US May Day rallies 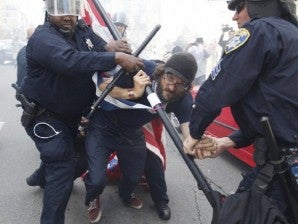 An Occupy Oakland protester resists police near Oakland City Hall in downtown Oakland during the May Day protest on May 1, 2012 in California. A handful of Occupy protestors were arrested as they clashed with police who used tear gas. Tensions rose after police chased down several protesters and detained them. A crowd quickly formed, shouting and hurling objects at the officers. AFP PHOTO / Kimihiro Hoshino

NEW YORK — Occupy protesters marched on Wall Street Tuesday in the highlight of a planned May Day “general strike” across the country, as police used tear gas amid clashes on the US West Coast.

More than 20 arrests were reported in various cities, including 10 at Los Angeles international airport and others in Oakland and Seattle, where shop windows were smashed.

By early evening, several thousand protesters — tens of thousands, according to organizers — had marched down Broadway towards Wall Street, in a noisy but relaxed rally watched by police, as two helicopters buzzed overhead.

Earlier small groups with placards reading “Prosecute the fraud” and “Jobs now” targeted Manhattan corporate institutions such as the Time-Life building, as well as Bank of America and HSBC branches, Disney and The New York Times.

Protests appeared to be peaceful and Agence France-Presse reporters witnessed only five arrests during early events, in contrast to previous Occupy marches that have typically ended in scuffles with the police and mass arrests on minor charges.

However, the disruption and potential for conflict was expected to heat up later in the day when activists staged a march through lower Manhattan to the Wall Street area.

Activists say they are protesting against corporate greed and the plight of ordinary people in an anemic economy and housing market.

“Hey, hey, BOA, who did you foreclose today?” protesters chanted at a Bank of America office building.

Similar protests were announced across dozens of US localities and in countries ranging from Spain to Australia.

“While American corporate media has focused on yet another stale election between Wall Street-financed candidates, Occupy has been organizing something extraordinary: the first truly nationwide General Strike in US history,” the OWS movement said on its website occupywallst.org.

On the West Coast, police made a number of arrests in Oakland — the scene of repeated protests last year, some of which turned violent — while black-clad demonstrators broke windows in Seattle.

The Oakland clashes came after officers ordered the crowd to clear a downtown intersection, but many refused to move, chanting, “We are not afraid. The whole world is watching,” the Contra Costa Times reported.

In nearby San Francisco, Occupy members cancelled a protest on the famed Golden Gate Bridge.

Two people were arrested and more were expected, after police used tear gas and pepper spray to disperse protesters.

In Los Angeles, 10 people were arrested near the city’s international airport for obstructing a main access road, while hundreds joined rallies in downtown LA, which remained largely peaceful by mid-afternoon.

The day of action comes against the background of a rancorous presidential election campaign, but also tests the Occupy movement’s ability to regain its flagging influence.

OWS appeared in New York for the first time last September, with activists taking over a square near Wall Street to protest against government bank bailouts, corporate salaries, and what they said was a hopeless economic landscape for ordinary people.

However, after police across America ejected OWS protesters from public squares two months later, the movement struggled to stay in the limelight and to back up its claim to represent the mainstream public, or the so-called 99 percent.