MANILA, Philippines — Following the death of one and injuries to several others during the enforcement of a demolition order at the Silverio Compund in Paranaque City, police are set to investigate Monday’s incident and sent a team to the area, a spokesperson said. 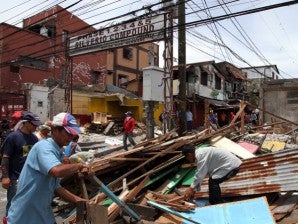 DEMOLITION IN PARAÑAQUE CITY. A demolition team takes down shanties at the Silverio Compound, in Sucat, Paranaque City, on Monday. At least one resident was killed and 40 were injured as police used tear gas against residents who retaliated by throwing rocks. INQUIRER/ NIÑO JESUS ORBETA

The panel will determine whether there was negligence on the part of the demolition team, Superintendent Jenny Tecson of the Southern Police District (SPD) said.

Tecson said the team from the District Investigation and Detection Management Division under the supervision of Senior Superintendent Rolando Asuncion, was sent by Chief Superintendent Benito Estipona, SPD director, to look into what prompted or provoked members of the Special
Weapons and Tactics (SWAT) to open fire.

She said that should anyone be found negligent, appropriate charges would be filled against them.

“But for the meantime, the 16 members of the SWAT team of Paranaque were disarmed and restricted,” she said.

Police were deployed to the Silverio Compound early Monday to help Sheriff Alejandro Abrematea of Branch 195 of the regional trial court of Paranaque City carry out the writ of demolition.

Tecson said police were reminded “to strictly adhere with the policy of maximum tolerance and respect the rights of all quarters under the rule of law.”

Violence erupted after talks broke down between the authorities and residents who hurled molotovs at the anti-demolition team as members of the SWAT team fired back.

After the smoke cleared, a resident, identified as Arnel Tolentino Leonor, 20, of No. 9, Purok 4, Silverio Compound was reported killed, and 15 others — 10 policemen and five others — who fought the anti-riot squad  –suffered injuries, Tecson said.