Pacquiao floats like a butterfly, out of ring | Inquirer News
Close
menu
search 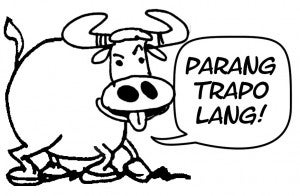 In the boxing ring, he stings like a bee, a la Muhammad Ali. In the political ring, he also floats like a butterfly—except that he seems to float from flower to flower, sipping nectar from each flower.

With the news that Sarangani Representative Manny Pacquiao plans to join the Partido Demokratiko Pilipino-Lakas ng Bayan (PDP-Laban), the former “pandesal” vendor turned millionaire athlete could end up—at that rate—joining more political parties (five in the last five years) than he has won championship belts in his ring career.

Aurora Representative Juan Edgardo Angara on Monday said he was perplexed by  Pacquiao’s political decisions considering his wealth and popularity.

“Pacman can actually win without a political party or whichever political party he chooses to join because of his enormous popularity and his capacity to singlehandedly fund his own political campaigns,” Angara said in a text message.

Kabataan party-list Representative Raymond Palatino said Pacquiao should not waste the adulation of Filipinos by treading the path of a traditional politician.

“Maybe, like the great Muhammad Ali, he floats like a butterfly. But as a political butterfly, he could lose the admiration and support of so many young people who expect him to shun the ‘tradpol’ ways. He must sting like a bee, in short, he should fight and reject ‘trapo politics,’” Palatino said.

Palatino said Pacquiao should know by now when he is being used.

“After one defeat in the election, after two years of being a politician, and after many years of mingling with politicians, Manny should know his real friends in politics. He should realize that he can already sustain his political career without being dependent on trapos,” Palatino said.

“The hope lies in his progressive advocacies, such as the P125 wage hike and his opposition to coal-fired plants. He will be remembered as a truly great people’s champion if he chooses to fight for the interest of the people,” Tinio said.

Tinio added: “In terms of his variable party affiliations, Pacman is no different from countless traditional politicians. If he follows that path, he will sooner or later lose the love of the people.”

Akbayan Representative Walden Bello said it was hard to fault Pacquiao for moving from one party to another because many of his political colleagues were doing the same thing.

“This is the dominant tradition in Philippine politics that parties of principle, like Akbayan, are challenging,” Bello said. “It would be worth his (Pacquiao’s) while to investigate what these emerging parties of principle stand for and maybe join one of them. That might stabilize him politically.”

Pacquiao first tried politics in 2007 by running for representative in his hometown, General Santos City, under the Liberal Party faction led by former Manila Mayor Lito Atienza. He lost to incumbent Darlene Antonino-Custodio.

In 2008, Pacquiao joined the Kabalikat ng Malayang Pilipino (Kampi), the party founded by then President Gloria Macapagal-Arroyo, whom he publicly supported in her most trying years in Malacañang.

A year later, he formed his own party, People’s Champ Movement, declaring he would run for a congressional seat in Sarangani, where his wife resided.

Barely a week after that election, Pacquiao appeared to flirt  with the newly minted LP under President Benigno Aquino III, even paying him a visit at his Quezon City home.

Pacquiao plans to run for Sarangani governor in 2013 and probably for senator in 2016.