Militants storm US Embassy ahead of Balikatan drill

MANILA, Philippines – Security guards could only look on as angry militant youth groups stormed the United States Embassy in Manila early morning Monday, hours before the commencement of the Balikatan (shoulder-to-shoulder) military exercises between Filipino and American troops. 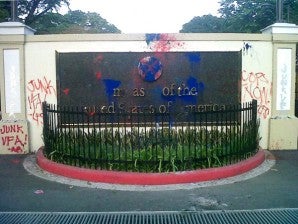 Protesters deface the seal of the US Embassy in Manila during a rally early Monday to coincide with the opening of the annual joint military exercise "Balikatan 2012" (shoulder-to-shoulder) between Philippine and US troops. ERWIN AGUILON/ RADYO INQUIRER 990AM

A Radyo Inquirer 990AM report said security guards were taken by surprise by roughly 50 members of Anakbayan, League of Filipino Students and National Union of Students of the Philippines who staged a lightning rally before 6 a.m.

Demonstrators slammed the Philippines-US military exercises as “front” for plans to re-establish the American bases in the country.

When the police arrived, the protesters had already splattered red and blue paint on the embassy’s seal at the seaside mission’s main gate, burned the American flag and scrawled “US troops out now—Anakbayan, LFS” on the embassy’s walls.

No arrests were made as protesters outnumbered police and later walked away.

Thousands of US and Filipino troops are taking part in 12-day combat and disaster drills. This year they are taking place in the western Philippines, where tensions with China have been rising over disputed territory in the South China Sea. With a report from AP