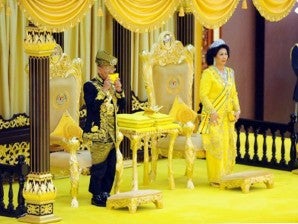 The 14th King of Malaysia, King Abdul Halim Mu'adzam Shah (L), kisses a copy of the Koran while Queen Haminah Hamidun (R) looks on during the coronation at the new National Palace in Jalan Duta, Kuala Lumpur on Wednesday. Recalling the pageantry of Malay sultanates centuries ago, Malaysia installed its 14th king in a solemn ceremony, who pledged to protect Islam and maintain peace in the nation. AFP

KUALA LUMPUR—Malaysia’s new king called for equality for all in the multi-ethnic Asian nation as he was enthroned Wednesday in a lavish ceremony steeped in centuries-old royal traditions.

Sultan Abdul Halim Mu’adzam Shah, 84, who was king previously in the 1970s, became the first person to hold the position twice under Malaysia’s unique rotating monarchy.

The Oxford-educated king is a lover of jazz, football, polo and golf.

The king, known as Yang di-Pertuan Agong or “He Who Is Made Lord”, formally took office in a televised ceremony in the yellow carpet throne room of the new hilltop palace in the capital Kuala Lumpur.

The monarch, dressed in black and yellow royal regalia, made of wool and embroidered with gold threads, was presented with a Koran and then with the royal long dagger — a symbol of power and authority — which the king drew and kissed.

He then took an oath of office to rule Malaysia in a fair manner, uphold the Islamic faith and ensure a just government.

In his speech, Sultan Abdul Halim praised Najib’s leadership and reminded the government to ensure prosperity for all Malaysians.

“All Malaysians have equal rights ….It is my wish to see all Malaysians gain from the country’s development,” he said.

Despite his merely ceremonial role, Malaysia’s king commands great respect from the public, especially majority Malays. The country’s sultans trace a lineage back to Malay sultanates of the 15th century.

Abdul Majid Puteh, 85, who knew the king when he was 12 years old while they were studying together, described him as a “friendly” person, adding that he once saw the king washing his own clothes.

In December after being installed as the new king, Sultan Abdul Halim called for unity amid rising racial tension in the multi-ethnic country as the country heads for possible snap elections.

The sultan, who stunned many in 2007 by walking two kilometers (1.2 miles) to a football stadium after his official car got stuck in traffic, had urged Malaysians never to repeat deadly 1969 race riots that still haunt the country.

The violence occurred just months before he took the throne as Malaysia’s fifth king for a five-year term starting in 1970.

But tensions have increased recently amid rising resentment over a range of racial disputes.

Najib’s Malay-dominated ruling coalition is seeking to stave off a rising opposition alliance led by Malay and Chinese parties.

Race and religion are intertwined in politics in Malaysia, where Muslim Malays make up about 60 percent of the 28 million population, followed by large Chinese and Indian minorities.

The country has had an elected monarchy since independence from Britain in 1957. In a unique arrangement, the throne rotates every five years among the rulers of the nine Malaysian states still headed by royalty.

Sultan Abdul Halim is the ruler of Kedah state in the north.

The sultan is a lover of jazz, particularly Nat King Cole, Frank Sinatra and Dean Martin.

He succeeded Tuanku Mizan Zainal Abidin, 49, who was one of Malaysia’s youngest kings.