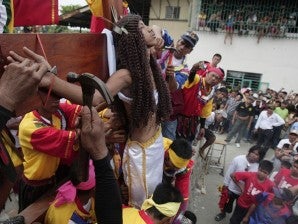 SAN FERNANDO, Philippines—Roman Catholic fanatics in Central Luzon had themselves nailed to the cross in a bloody display of religious frenzy as the Christian world marked the day Jesus was crucified.

The gruesome real-life reenactments of the crucifixion, which are held every Good Friday, began in the farming region north of Manila at 11 a.m. (0300 GMT). They are frowned on by the Catholic church but have become freak tourist draws.

Faith healer Arturo Bating, 44, spread his arms and maintained stoic calm as neighbors hoisted him onto a wooden cross atop a sandy mound then drove 10-centimeter (four-inch) nails through his palms.

“This is a vow I had made to God, so that He will spare my family from sickness,” the penitent, swathed in a white robe, told Agence France-Presse after his ordeal, which lasted several minutes and was seen by hundreds of people.

“It was a bit painful, but bearable,” added the first-timer, who now intends to take part in the ritual every year.

Two other devotees were swiftly nailed on to the same cross in the village of San Juan, on the outskirts of the northern city of San Fernando.

Alex Laranang, 57, told AFP he had had himself crucified every year for the past 12 years.

“I had made a vow to do this every year until I die,” said Laranang, who sells snacks aboard buses for a living.

“I do not expect anything in return. I do this for my God.” 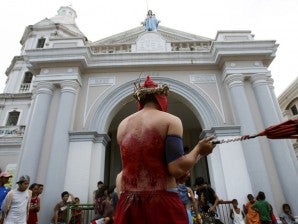 ATONE FOR SINS A hooded penitent flagellates himself in front of the San Fernando Cathedral in a ritual to atone for his sins in observance of Holy Week Thursday in San Fernando City, Pampanga. AP

Like Bating, he said the physical pain was a minor inconvenience.

“I hardly feel any pain. The nerves have been deadened.”

He added: “After this, I go home, eat and go to sleep. After two days I go back to work.”

In the nearby village of San Pedro Cutud, local officials said up to 20 penitents would be nailed to crosses during the day.

A woman and four male devotees, including two who were doing it for the first time, were also set to be nailed to crosses during the day in Paombong town, Bulacan, said local official Reynaldo Sulit.

Archbishop Jose Palma, president of the Catholic Bishops’ Conference of the Philippines, said earlier this week that while the church did not encourage the extreme show of worship, it does not fault those who would go through it.

“We do not judge and condemn, but we discourage it,” the church leader said on Catholic radio Veritas.

Crucifixions are the grisliest, but by no means the only extreme acts of penitence on show in the Philippines, Asia’s largest Catholic outpost where the sect counts some 75 million adherents.

Many Filipinos practiced more practical acts of piety like visiting a series of churches on foot to pray during the Maundy Thursday and Good Friday holidays.

But dozens of barefoot male devotees with black facial hoods whipped their bare backs bloody with strips of bamboo tied to a string as they went around the San Fernando neighborhoods on Thursday and Friday.

They were followed by groups of children who covered their faces as blood from the whips sprayed on to their clothes.

In Paombong, about a thousand spectators patiently waited for the crucifixions to start under the hot tropical sun.

“People here follow their own beliefs. We should not take that against them,” said Sulit, the local official who oversees the ceremony for the municipal government.