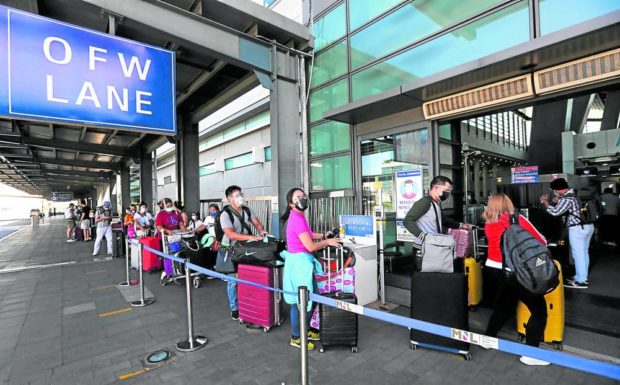 ONLY FILIPINOS TARGETED | Contracted workers queue up on a special lane at Ninoy Aquino International Airport in this 2021 file photo. (FILE PHOTO)

MANILA, Philippines — Facebook and other messaging apps are being used in an elaborate multimillion-dollar “modern-day slavery” scheme that has forced trafficked Filipinos to operate cryptocurrency scams in Southeast Asian countries, Sen. Risa Hontiveros said on Wednesday.

Presiding over a Senate hearing, Hontiveros reiterated her call for the government to “overhaul” the Bureau of Immigration (BI) due to the continued involvement of some of its personnel in illegal activities even after dozens of them were indicted over the “pastillas” racket.

During a three-hour hearing of the Senate committee on women, children, family relations and gender equality, Hontiveros presented as witnesses three victims of a Chinese syndicate that had recruited Filipinos supposedly as call center agents.

However, they ended up being forced to work in “fraud factories” that duped foreigners into placing their money in bogus cryptocurrency investments. “What we have found out is staggering,” Hontiveros said. “This seems to be an ‘industrial complex’ that involves various actors, from illegal recruiters or agents here in the Philippines, their connection to the BI and their network across the countries in Southeast Asia.”

These human trafficking cases were “an emerging humanitarian crisis perpetrated by the vilest of criminal syndicates,” she added, pointing out that the modus had already victimized hundreds of Filipinos.

“We need to stop at nothing until those who collude with these syndicates are put behind bars. Anything short of this will only lead to more Filipinos being thrown to the wolves,” Hontiveros said.

A victim identified only as Ron said that his recruiter, who had contacted him through video call on Telegram, promised to land him a job as a chat support staff or a call center agent in Cambodia.

He said he was supposed to earn $800 a month, although he received only $100 when he failed to convince new “investors” since he started working in July 2022.

Ron said he was then transferred to the company’s human resource division where he was assigned to post job openings on various Facebook groups targeting Filipinos. “We were instructed to recruit only Filipinos,” he told the Senate committee.

He added that he was also “trained” by a certain Rachel Almendra Luna to facilitate the travel of Filipinos to Cambodia without being flagged by immigration agents.

Hontiveros said that social media networks, messaging apps and dating apps should be more vigilant to prevent syndicates from using their online platforms for criminal activities. “These are being used in the fake recruitment of [Filipino workers] and in swindling foreigners. These sites have been enabling flexibility and anonymity of illegal recruiters and human traffickers,” she said.

Migrant Workers Undersecretary Bernard Olalia said that they had actually sought the assistance of Meta Philippines to take down Facebook pages posting spurious job openings for Filipinos in other countries.

BI to reshuffle personnel after 3 officers linked to human trafficking