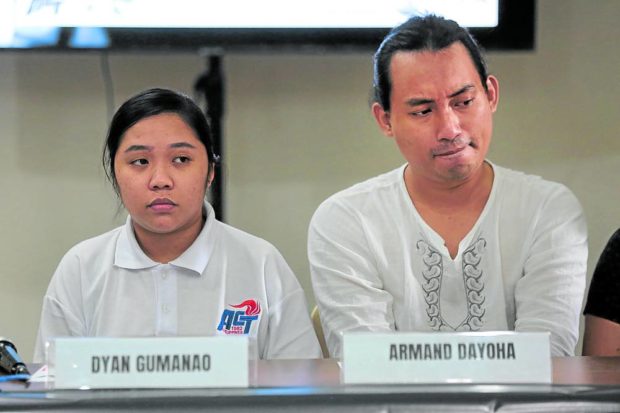 CATCH AND RELEASE | The men who abducted Cebu activists Armand Dayoha and Dyan Gumanao on Jan. 10 and held them for six days haven’t been identified but the two say they are sure it was “state forces that did this to us.” (Photo by GRIG C. MONTEGRANDE / Philippine Daily Inquirer)

MANILA, Philipines — For days, they were denied the use of their eyes, ears, and even hands. Then their captors tried to get into their heads.

Cebu-based activist leaders Armand Dayoha and Dyan Gumanao gave a gripping account of their ordeal after they were abducted by several men in broad daylight at a Cebu pier on Jan. 10, an act described by rights advocates as a symptom of worsening impunity.

Speaking to reporters in Manila on Tuesday, eight days after they regained freedom, a tearful Gumanao and Dayoha recalled how they were blindfolded and tied up by their captors upon disembarking from a ship at Cebu Port’s Pier 6 at about 9:30 a.m.

The men in plain clothes, with some of them wearing facial covers, had identified themselves as police officers, according to the two.

“When they grabbed us, I was screaming for help, ‘Tulong po, aktibista po kami (please help, we’re activists),’” Gumanao said.

“I even saw that there were some uniformed personnel around the pier so I was screaming but nobody tried to help us.”

A video posted by a concerned citizen soon circulated and went viral on social media, purportedly showing Gumanao and Dayoha being forced into a silver sport utility vehicle (SUV) by a group of men while bystanders watched.

Except for a text message sent by Gumanao to her family upon arriving in Cebu, there was no communication from either of them until almost a week later.

On Jan. 16, Dayoha and Gumanao were rescued after they were abandoned by their abductors at a resort in Carmen town, about 41 kilometers north of Cebu City.

Weeks before the incident, both had confided to their families and colleagues that they were under surveillance and being harassed by people they believed were state agents.

After the men hauled them into the SUV, they were immediately blindfolded and tied up, the two recalled, adding that they made stops in several places by land and sea, and the two believed they reached Negros Occidental by ferry at one point.

Between those travels, their kidnappers “interrogated us about our work, the people whom we work with, and our families,” they said.

“We had no eyes, no ears, we didn’t even have hands when we tried to pee,” Dayoha recounted.

The men told them that they were part of a task force assigned to neutralize communists, claiming that other units had wanted to “get” them. The captors claimed further that they intervened to ensure the safety of the two activists, but in return, they should turn on their colleagues and become intelligence assets.

The men threatened “fatal consequences” if Gumanao and Dayoha did not cooperate with the government, they said.

“They kept trying to get into our heads and associating activists with terrorists,” Dayoha said.

“But tell us, what’s so wrong about being an activist? Just because we were activists does not mean we can be made targets for abduction, for killings, arrests,” he said.

An emotional Dayoha said he drew strength from his conviction that “our principles are not wrong and that we are not wrong when we demand for higher living wages, for better benefits, for freedom to unionize.”

Under duress, both of them signed documents promising to cooperate with the government in the negotiation for their release, they said.

Gumanao lamented that during their disappearance, as their families and friends were frantically searching for them, the authorities, including local police, the Maritime Police Station, and the Philippine Coast Guard, “did not seem to take reports of our abduction seriously.”

“It was so insulting because [our parents] were given the runaround and were even told that we might have eloped,” she said.

Before they were freed, their captors, who told them that the Carmen resort had been reserved for them, ordered the two of them to post a story on Facebook to show that nothing bad had happened, Gumanao said.

On Jan. 15, Gumanao was finally able to send a message to a sibling asking to be fetched at the resort. They were rescued the next day.

While the abductors haven’t been identified, the two were “only certain that it was state forces that did this to us,” according to Gumanao and Dayoha, who have yet to discuss their legal recourse with lawyers.

For now, Gumanao said it was “impossible to trust the PNP (Philippine National Police) again… how can they be impartial about this if our abductors themselves had identified themselves as PNP?”

On Wednesday, Karapatan-Central Visayas called on the Central Visayas police to refrain from redirecting blame on Dayoha and Gumanao despite their accusations against the police.

The group said the police should understand that the two were still suffering from the trauma they experienced in the hands of their abductors who had identified themselves as policemen.

“They don’t feel safe as of now. They feel that if they go out, they might be abducted again,” said Dennis Abarrientos, the group’s spokesperson.

Since 2020, Abarrientos said Dayoha and Gumanao had been at the receiving end of tailing and harassment by state forces.

In June 2020, Gumanao was among eight activists arrested during a rally against the antiterror bill near UP Cebu. Three months later, the court dismissed the charges for lack of merit.

In January 2021, Dayoha and Gumanao reported being tailed by plainclothes men until they were able to lose them by going to a public place.

Lt. Col. Albert Quilitorio, head of an investigation group formed to look into the abduction, said it had gathered pieces of evidence that could help shed light on what happened, including closed-circuit television footage of the scene.