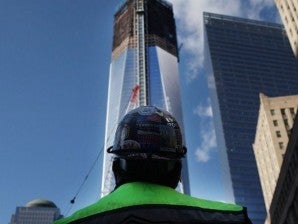 A construction worker looks up at One World Trade Center, the central skyscraper under construction at Ground Zero, on January 30, 2012 in New York City. The price tag for One World Trade has recently been valued at $3.8 billion, which would make it the world's most expensive new office tower. Most of the cost overruns are due to the security measures being taken in the design of the building which sits on a site that has been bombed twice by terrorists. To offset the costs of One World Trade Center, which is being built by the Port Authority of New York and New Jersey, higher bridge and tunnel tolls have been instated and there has been a reduction in spending on transportation infrastructure. The 1,776-foot skyscraper is expected to be completed at the end of 2013. SPENCER PLATT/GETTY IMAGES/AFP

The building is most commonly known as the “Freedom Tower” but officially called “One World Trade Center.”

“Steel installation for One World Trade Center has reached the 100th floor, with four more floors to go before it reaches the top of the tower,” the Port Authority of New York and New Jersey said in a statement.

The Freedom Tower, scheduled to be opened in 2013, is being built to a height of 1,776 feet (541 meters), which is a symbolic figure reminiscent of the US year of independence.

The glass walls have been built to the 70th floor while the concrete floors are poured to the 87th floor, the Port Authority of New York and New Jersey said on its website.

The building is planned to be the tallest in the United States when it is completed.

The skyscraper is being built alongside the 9/11 Memorial, where the World Trade Center’s Twin Towers stood until terrorists slammed airliners into them, killing nearly 3,000 people.