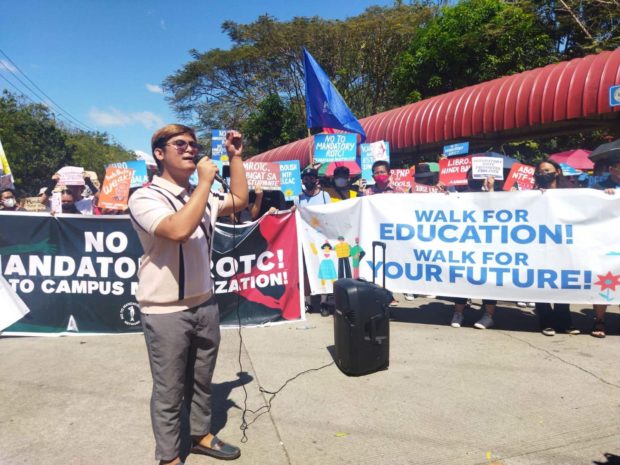 Youth organizations troop outside the Senate of the Philippines building in Pasay City on Wednesday, January 25, 2023 to oppose the bid to revive the mandatory ROTC program in the country. (Photo by League of Filipino Students)

MANILA, Philippines — Materials brandished by the youth and student contingents who assembled outside the Senate in objection to the revival of the obligatory Reserve Officers’ Training Corps system gave away their identity, Senator Ronald dela Rosa said on Wednesday.

Dela Rosa spoke in a Senate committee on higher, technical, and vocational education hearing after Senator Francis Tolentino pointed out that the youth rallying against the proposal to bring back mandatory ROTC are outnumbered by the volunteers who want to help implement the program.

(We shouldn’t see the lack of resources as a major hindrance. Many people want to help. If we can solidify all of those who are volunteers right now, I think we will all be surprised. Let’s not pay attention to those rallying outside. They’re just a few noisy people with tarpaulins, but more want to help.)

Dela Rosa was then shown a photo of the protest outside the Senate building.

(It’s evident with the red protest materials they’re raising. What does this mean? Many left-leaning people are trolling there. Who else wants to weaken the republic? The leftists who want to paralyze us so that they can take the power of the government.)

Senator Pia Cayetano later noted that only representatives from the National Youth Commission “spoke on behalf of the youth.”

“I believe there are other youth groups who would like to speak also…I hope we will also be able to listen to them,” she said.

Cayetano stressed the need to listen to other youth representatives, as well as developmental psychology and education experts, to discuss whether reviving the mandatory ROTC program is the best way to address “existential threats” like food security, water scarcity and draining human capital.

But according to dela Rosa, the Senate is not closing its doors to hearing the dissenting voices of other youth groups. 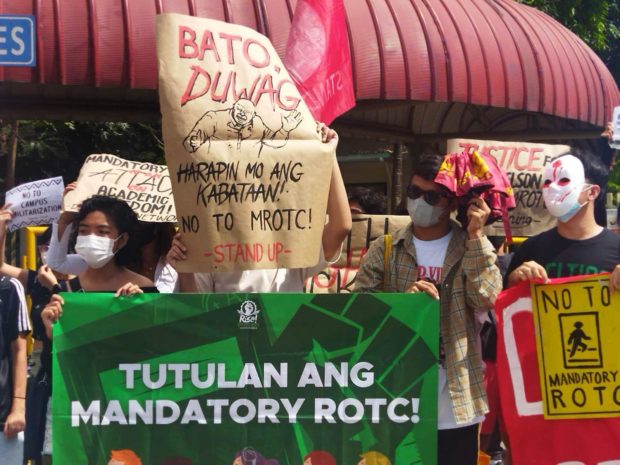 Youth organizations troop outside the Senate of the Philippines building in Pasay City on Wednesday, January 25, 2023 to oppose the bid to revive the mandatory ROTC program in the country. (Photo by League of Filipino Students)

Without naming anyone in particular, Dela Rosa noted that he was not shaken by his previous experience of a resource person disrespecting him during a Senate hearing.

(I wasn’t fazed by that. I’m still open. I’m taking the cue from you that we must have healthy discussions in our hearing. Don’t worry. We will invite these youth you’re referring to in our next hearing.)

Dela Rosa further clarified that other youth and student organizations were not invited to the Senate panel hearing, because they only expressed the intention to join on Tuesday.

(It was too late, and we had already sent out all our invitations, so they were omitted. But they’re still here now. They’re also here in the hearing because they’re outside, waving their red flags.)

During the hearing, it was raised by Defense Undersecretary Franco Gacal that while the department was in favor of the bid to revive the mandatory ROTC program, there are “critical requirements that must be addressed” such as lacking manpower, financial resources and logistical facilities, among others.

According to him, 9,000 to 10,000 military personnel are needed to implement the program.

“Iyong issue about logistics and finance, it can be addressed with Congress support but really, the main concern right now is about manpower,” he said.

(The logistical and financial issues can be addressed by Congress support, but the main concern right now is manpower.)

Senator Sherwin Gatchalian then asked the Department of National Defense to furnish the body with a list of the requirements raised by Gacal.

In December last year, the House of Representatives rushed the passage of a measure establishing a compulsory military and civic training program in college, which critics pointed out was essentially a renamed version of the ROTC.

ROTC was made optional through the National Service Training Program Act of 2001.

Calls to abolish the ROTC were fueled by the killing of University of Santo Tomas sophomore cadet Mark Welson Chua in 2001 after he exposed corruption in his school’s ROTC. — with reports from Niña Cuasay, trainee