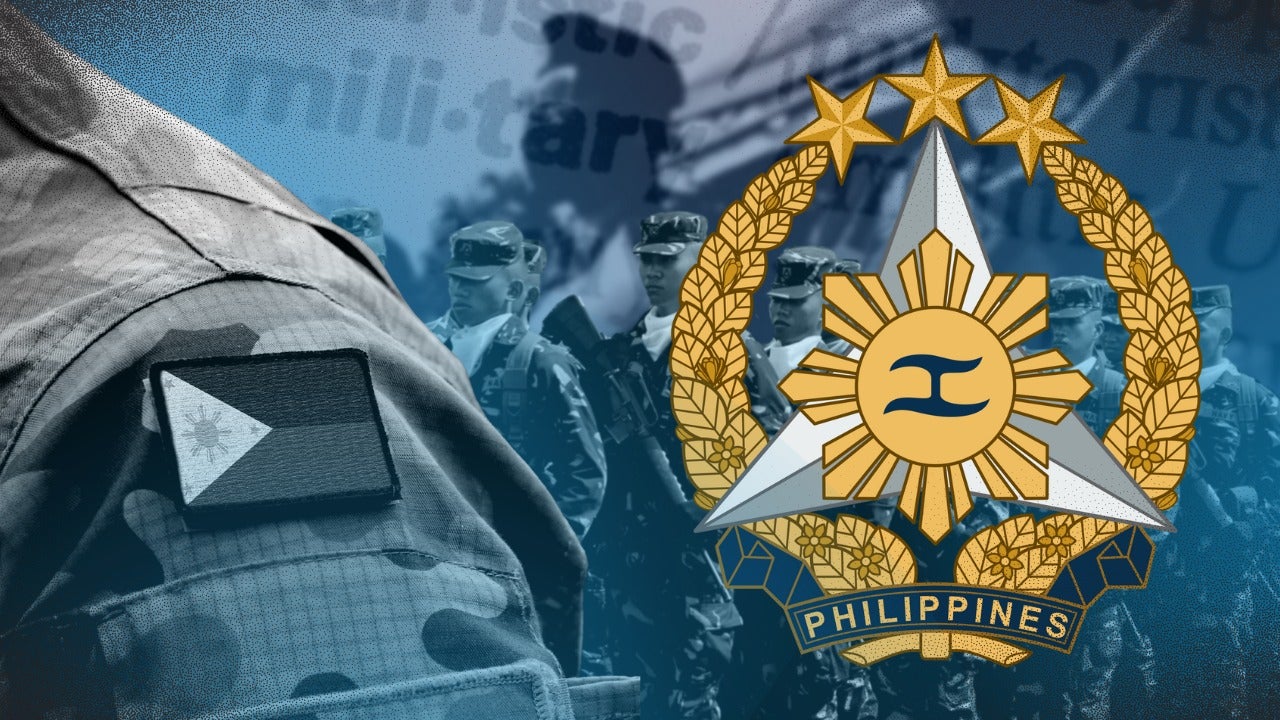 MANILA, Philippines—A law signed last year to end the “revolving door policy” in which military chiefs serve for only a few months or a year, has become the reason for “rumblings” in the Armed Forces of the Philippines (AFP).

This was revealed by Defense Secretary Carlito Galvez on Friday (Jan. 20) as he stressed that the rumblings were just expressions of tampo by military men who are “anxious” over the possible implications of Republic Act (RA) No. 11709 on their careers.

As stressed by erstwhile Sen. Panfilo Lacson, RA No. 11709 will end disservice to the military because instead of staying in office for only a few months, key AFP officials will finally have the chance to implement legacy programs.

But apparently, the law did not please thousands of military men, especially those with the rank of private to first chief master sergeant, who are “understandably anxious over the perceived uncertainty in their careers under the new law.” 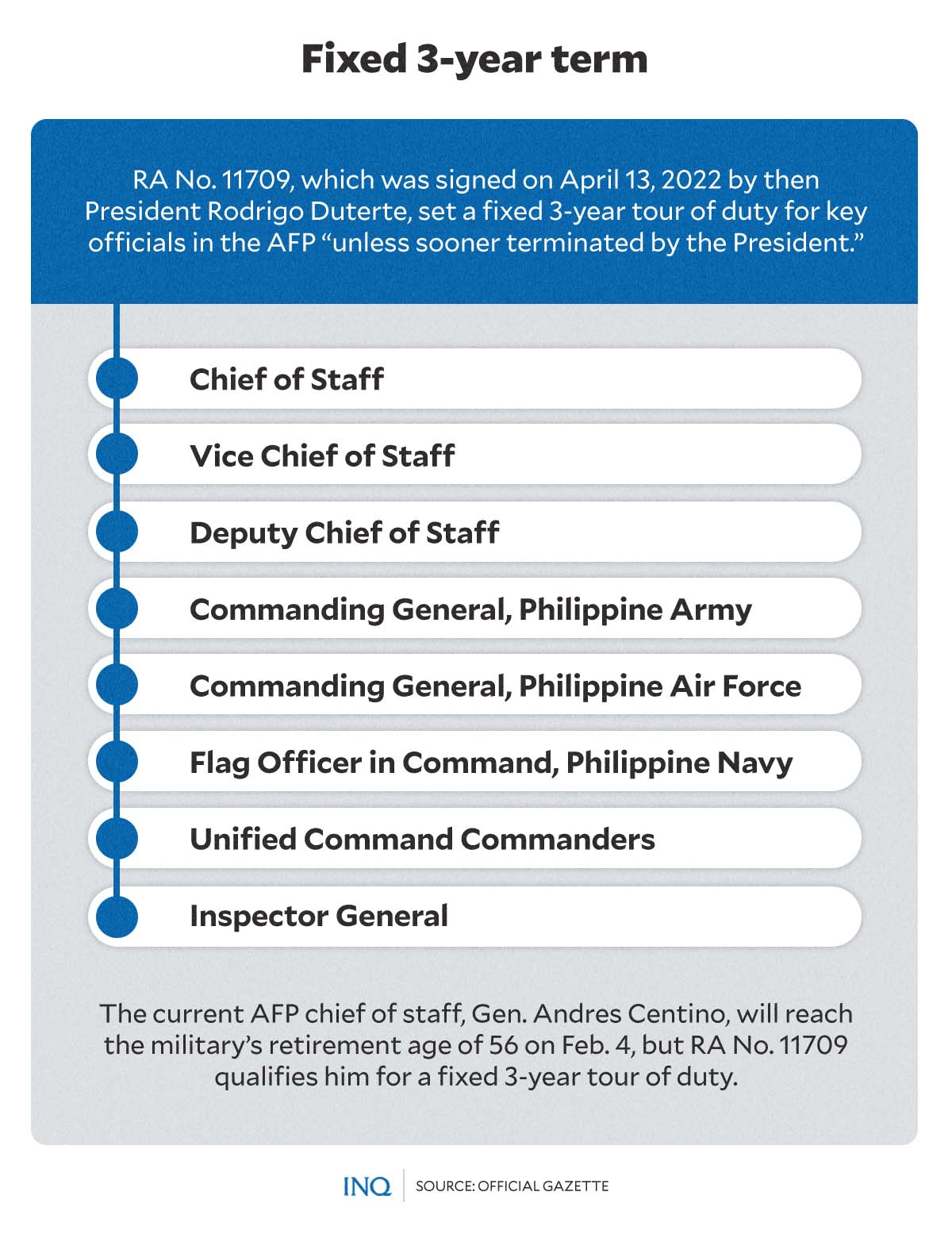 This was the reason that, as Senate President Juan Miguel Zubiri backed the recommendation of the Department of National Defense (DND) to replace the fixed term with an “extended tenure of service,” Galvez said the AFP has been in “high morale.”

“We will remove the term ‘fixed term,’ instead we will use the term ‘extended tenure of service.’ We will use that so there is no such thing as fixed term already, it will not be absolute, we will have flexible career management for our key officers,” Galvez said.

Last week, the Senate Committee on National Defense and Security conducted a hearing on the proposed amendments to RA No. 11709, with Galvez saying that this aims to enhance the professionalism and efficiency of the AFP.

Based on proposals by the DND, the chief of staff will have a maximum term of three years, while service commanders of the Army, Air Force and Navy will have two years. The superintendent of the Philippine Military Academy (PMA) will have a four-year tour of duty.

The AFP vice chief of staff, deputy chief of staff, unified command commanders, and inspector general, meanwhile, can be promoted to a higher post if they still have a year left in active service, as proposed by the DND.

“The issues surrounding the law are being threshed out collaboratively between the DND and the AFP,” Galvez said, stressing the military’s commitment to the Constitution, people, and the flag.

“Our officers and men are continuing to fulfill their mandate of protecting our nation.”

But defense analyst and military historian Jose Antonio Custodio said the law is not really the problem because as long as “ambition drives many of these generals […] there will always be intrigues, placate for positions regardless of the laws that are passed.”

Custodio, a fellow of the Consortium of Indo-Pacific Researchers, told INQUIRER.net that most military men are “career oriented” and since each PMA class is being catered to, there came the “revolving door policy.”

READ: The trouble with ‘revolving doors’

“First, this was meant to placate the military and second, to reward loyal officers within the AFP because at the end of the day, professionalism is not the determining factor in appointments, it’s the loyalty to whoever the appointing political authority is.”

“It is the confidence that the said officers enjoy with the appointing political authority […] Then at the same time, in each PMA class, there will always be those ambitious who want to become chief of staff or commanding general,” he said.

Custodio said when you merge these with each other, then you have a revolving door, explaining that “you have to placate everybody and then your basis is rewarding also those who are loyal to you.”

But how did this start?

Looking back, Ferdinand Marcos Sr., who was president for over 20 years, “ensured that only those he knew were loyal to him would remain as commanders and that’s why he had overstaying generals,” with one of them even serving for almost 10 years.

This was the reason that the Reform the Armed Forces Movement was launched to call for reforms to make appointments more flexible and to make the movement of officers more dynamic: “There was a call to let the overstaying generals go so that there will be movements.” 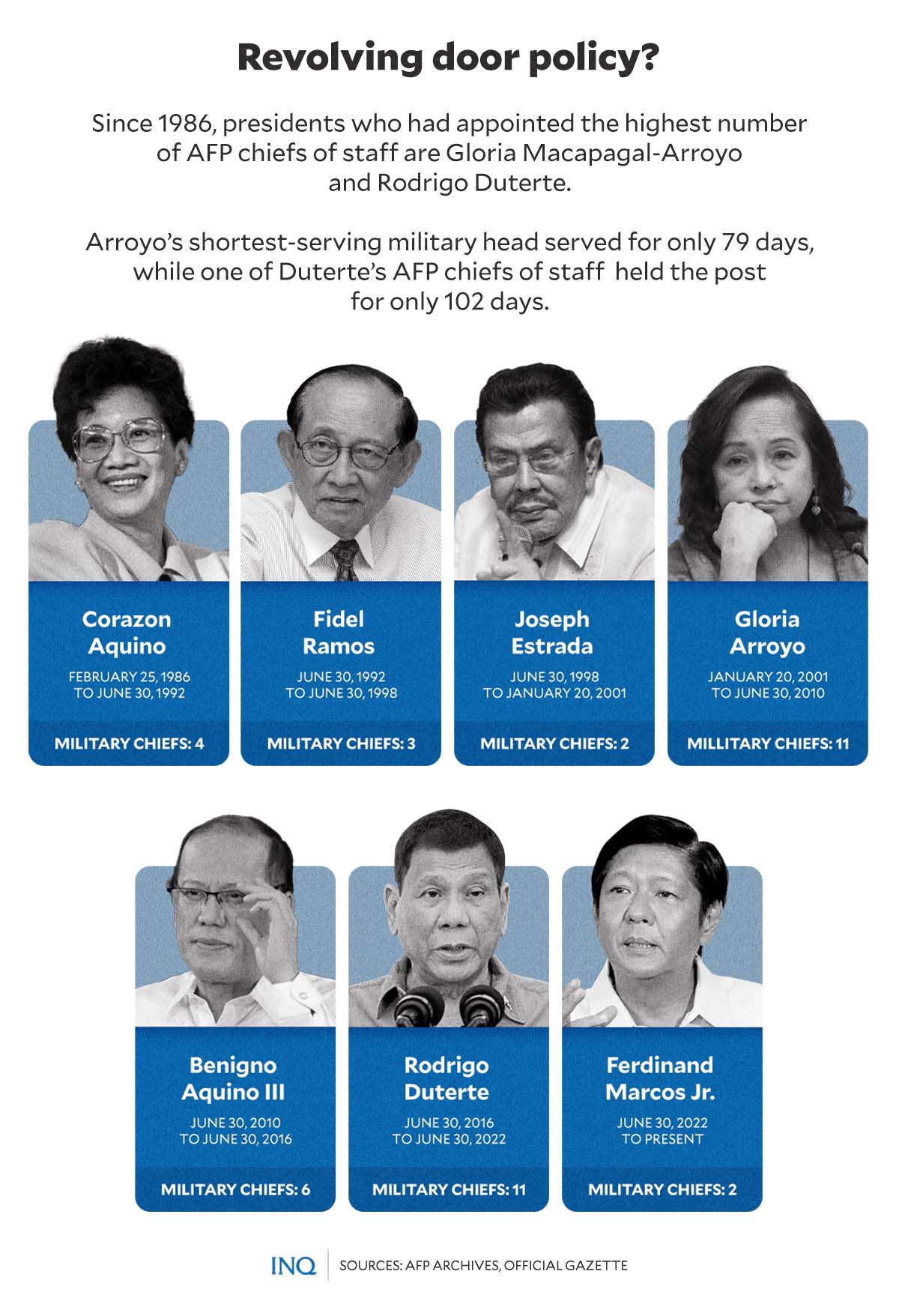 “So the response was to make it dynamic, however, the AFP is also at fault because they launched many coup attempts in the early days of the Cory Aquino presidency. Of course, the political authority will be paranoid of the military,” said Custodio.

“What would you do then to make them happy? You start appointing people from all PMA classes, so that all of them are quiet, all of them become contented cows,” Custodio said on Tuesday (Jan. 24).

This was the reason that presidents who had the most instability, like Gloria Macapagal-Arroyo, who was president for nine years, tended to have military chiefs who stayed for only a few months or a year.

“It has become a culture,” Custodio said.

Based on archives, since 1986, the presidents who had appointed the highest number of AFP chiefs of staff are Arroyo and Duterte, who both had 11. Next to them is Benigno Aquino III, who had four, while Fidel Ramos and Joseph Estrada had three and two, respectively.

Arroyo’s shortest-serving military head—Benjamin Defensor Jr.—served for only 79 days, or less than three months, while one of Duterte’s AFP chiefs of staff—Noel Clement—held the post for only 102 days.

Indeed, it was a reward to make them pleased “so they won’t think of ways to destabilize you,” but Custodio said there are people who realized that it is becoming a problem. Thus, the RA No. 11709 that set a fixed term for key AFP officials.

But at the end of the day, he said it was not absolute: “If you read the law, the fixed term is a suggestion to the Commander in Chief. Meaning to say, if the President appoints you, you can serve for three years. You don’t need to retire.”

“However, if the Commander in Chief says that ‘I don’t like you anymore,’ you will be out regardless of your three-year tour of duty,” he said, pointing out the provision of the law which states that the term shall be for three years “unless sooner terminated by the President.”

“So President Ferdinand Marcos Jr. did not violate the law because as the Commander in Chief, it was within his purview to relieve commanders,” Custodio said, referring to the President’s appointment of Gen. Andres Centino as AFP chief of staff after replacing him last year.

READ: Marcos puts Centino back as AFP chief; Bacarro out 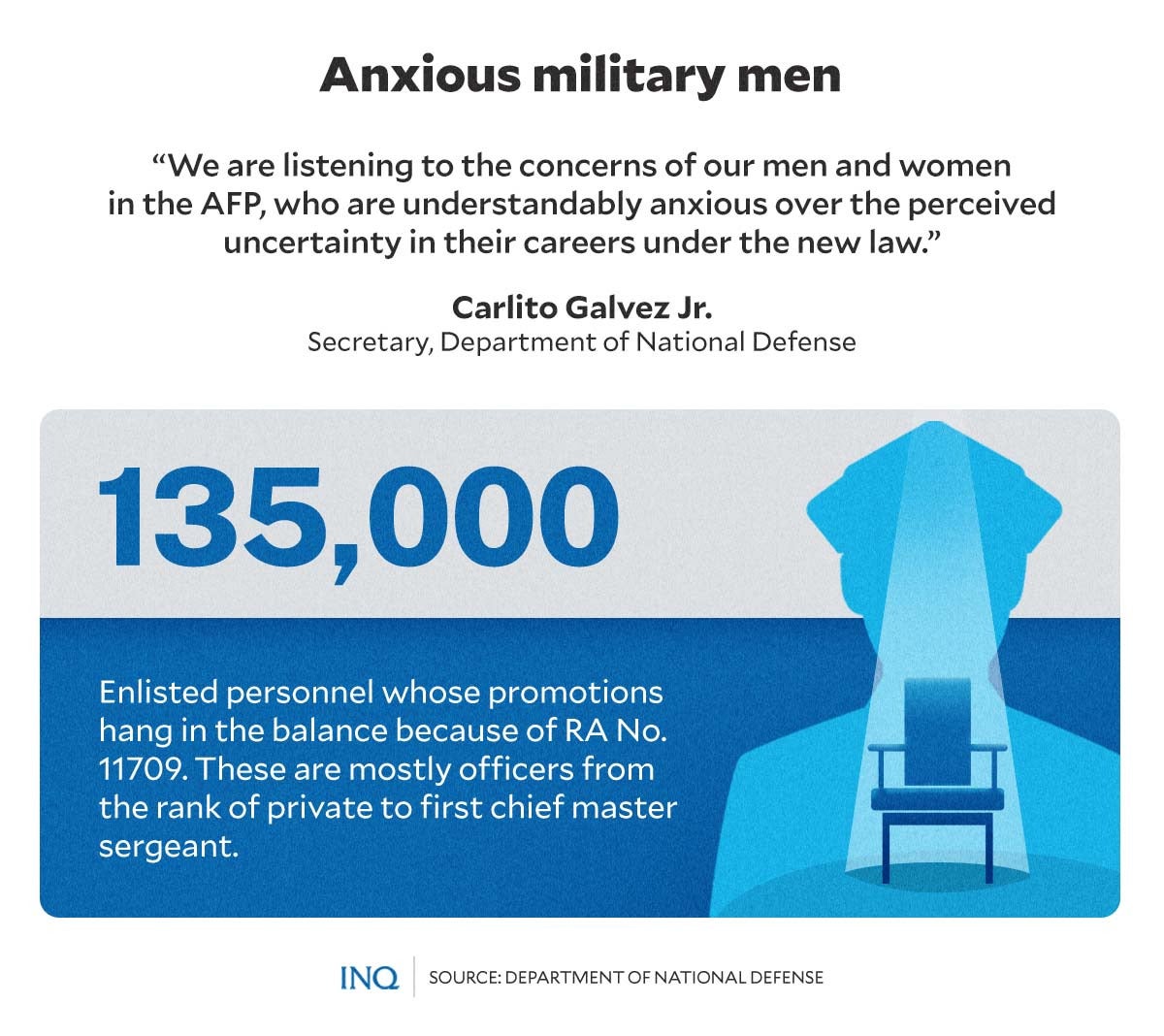 Centino was replaced by Lt. Gen. Bartolome Bacarro, a Medal of Valor awardee, in August 2022. Back then Centino was already about to retire in six months, in adherence to Presidential Decree 1638, which set the compulsory retirement age at 56.

But while Marcos Jr. exercised his authority and replaced Centino instead of letting him finish his term, Custodio said there had been intrigues so he backtracked and brought back Centino again as military chief.

This means that Centino, who is about to reach the age of 56 on Feb. 4, has been qualified for a fixed three-year tour of duty.

As stressed by Maj. Gen. Edgard Arevalo (Ret.), back in August, Centino’s successors-apparent, who are from PMA Class of 1989, expected him to retire six months later, but he was replaced by Bacarro who, like Centino, belongs to PMA Class of 1988.

He said as Bacarro was heralded as the first recipient of the fixed three-year term, which RA No. 11709 expressly provides, the “blaze” got worse.

“Because if he will be in that post for three years, he will outlast all frontrunners of Class 1989 and his successor will potentially be from the PMA class of 1990 or 1991. Class 1989 will then lose the chance to be the ‘ruling class’,” said Arevalo.

“Hence, the stake on Bacarro’s short stint. And the reappointment of Centino only delays the assumption of the next ruling class,” Arevalo said in his column.

The first “misstep” of Marcos Jr., he said, was ordering Centino’s removal as AFP chief of staff while he still had more than six months to serve prior to his compulsory retirement date, which is Feb. 4, 2023.

“It created the first ripples of what would become the waves leading to the rumblings that Galvez admitted before the Senate Committee on Defense and Security.”

Based on the AFP process, there are the Board of Senior Officers and Board of Generals deciding on who to recommend for promotion, but Custodio said, there will always be political interference in the process.

This was the reason that he said that a law would be useless if it is not premised on “effectiveness, efficiency and competence.” He said “it’s not like everything will suddenly become a paradise on earth once military chiefs are given fixed three-year terms.”

“I am talking about patronage here because if you have this within a military system, even if you set a fixed three-year term, what if the one appointed is incompetent, inefficient,” Custodio said, stressing that the problem is really patronage within the institution

“Then one more problem is seniority. This issue also allows problems to happen because instead of having one’s capabilities as the basis for his or her promotion, decisions are being based on who is more senior,” he said.

“As a result, loyalty and seniority become the primary factors. So where’s the competence, efficiency and effectiveness?” he said as he stressed that there will always be problems if these factors persist.

Last week, Galvez reminded military men not to become apprehensive, saying that the DND and AFP has recommended that the promotion and retirement system of enlisted personnel will not be covered by RA No. 11709.

“Your human resource development systems/programs will be directly under the different major service commanders. Once the law comes out, you will be excluded. Our only prayer is that transition to RA 11709 will improve and expedite the management of our Armed Forces.”

“We are hopeful that the amendments will come out soon so that your careers will not be affected,” he said.